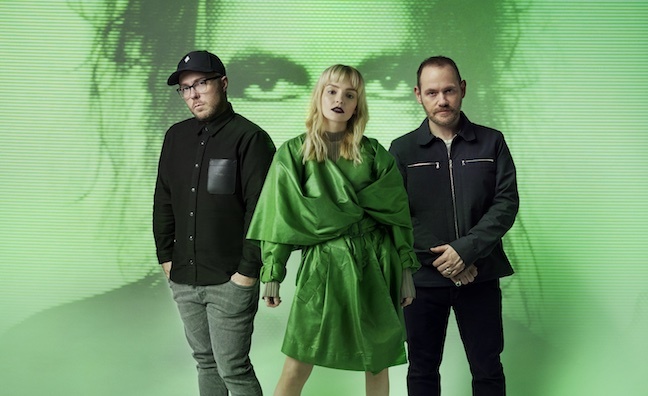 Chvrches have revealed to Music Week how they managed to entice Robert Smith to perform on their new record.

The Cure frontman provides vocals on How Not To Drown, which is taken from album Screen Violence (released via EMI on August 27). Smith has also remixed the track.

Chvrches initially approached the rock pioneer via Campbell McNeil, their co-manager with Danny Rogers as part of Lunatic Entertainment, who emailed a mutual acquaintance.

Smith then got in touch, simply asking: “I heard you were looking for me. What do you want?”

“We were like, ‘Guys, what do we want?’” the band's Martin Doherty told Music Week, revealing that they sent him a selection of music before Smith elected to work on How Not To Drown.

“We left him for a while,” added Doherty. “You know, you don’t follow-up email Robert Smith, you send it, you cross your fingers...”

After a month of silence, The Cure man delivered.

“An email came through from Robert, ‘Here’s your tune, let me know if you like the vocals and let’s talk about how to finish it’," remembered Doherty. “This is a bit much, but I was definitely crying!”

For bandmate Lauren Mayberry not only did Chvrches get a new track, but the collaboration restored her faith in creativity.

“I’ve definitely been quite disillusioned by the quote-unquote industry at certain times,” she explained, “and he is everything that isn’t that, just such a true artist and a true gem.”

Chvrches were speaking to Music Week for our latest issue, which is on sale now. Plus, read our interview with Jehnny Beth on why all artist can benefit from the power of collaborations.