Damon Albarn talks Gorillaz, the future of the music biz (and Blur) 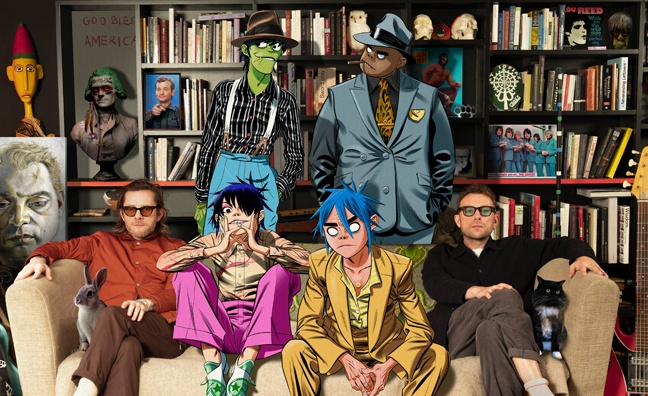 Damon Albarn has long been British music’s renaissance man, behind a dizzying range of projects, from Blur to The Good, The Bad & The Queen, Africa Express, his solo career, his opera work and many, many more.

And then there’s Gorillaz. Since forming the band with illustrator Jamie Hewlett 20 years ago, they have pioneered using featured artists in the pop world and embraced cutting-edge technology from live holograms to 3D videos and AR apps.

And now, in a Music Week cover story that’s got the whole biz talking, Albarn says he – in conjunction with his label Parlophone and his managers, Niamh Byrne and Régine Moylett at Eleven – wants to change the way music is released. Since the start of the year, Gorillaz’s Song Machine project has seen them drop ‘episodes’ every 6-8 weeks. Each episode consists of a collaborative song, an accompanying animated video, created by Hewlett, and a bite-sized podcast. So far, the likes of Robert Smith, Slowthai and Slaves, Peter Hook and Georgia have all featured, with more big names from Elton John to St Vincent following in future episodes (or on the album, Song Machine Season One – Strange Timez, due on October 23).

So Music Week met with Albarn to talk about his vision for Music Biz 2.0. And if you’re a bit more old school, he also gave an update on one of his other bands…

What made you want to work in this new way?
“I’d just had enough of having to finish a whole body of work and wait for six fucking months. I wanted to just do a tune a month and put it out. It hasn’t worked quite like that because of Jamie having to do so much. Animation just takes a long time, it’s impossible to do it any quicker.”

In a way, it turned out to be the perfect method to release music during a global pandemic…
“Yeah, I suppose so – that’s hardly an accolade though, is it? I just wanted to change it up, I didn’t want to be spending six months making an album. I wanted to react to stuff, be agile, make each individual thing totally different from the last thing and not necessarily have to be coherent. But as it’s turned out, we’re going to put it all together, we’ve got a great running order and it sounds fucking unbelievable, it’s one of the best albums I’ve ever made. It’s a really strong album because every tune has that single intention to it. To make an album of all singles is such a rigorous pursuit you don’t normally do it – but accidentally, we’ve done that.”

Did you realise you were creating a potential new business model?
“It was an opportunity to be more fluid, be able to change track, sidestep, do anything that you want to do and not get bogged down with one trope. React, evolve, react, evolve. And I suppose that now seems to be a good model! I’ve really enjoyed listening to the Song Machine album, it’s like listening to an entirely different entity. I’d just been concentrating on each episode so to hear it like that was a joy. But it also exists in these episodes, so it’s not tied to that, and every song will have been listened to a lot by the time the album comes out, so it doesn’t matter. That’s for people who like that and the other way is for people who like that.”

Anything is possible now

So will there be a Song Machine Season Two?
“Yeah. The first season is going well so there’ll probably be demand for a season two. And the lovely thing about it is, you don’t have to wait until it’s all finished to start rolling it out.”

So it could go on forever, like a TV show?
“Basically, yeah, that’s the idea. And the thing is, we can work with anyone. Maybe we’ll do a season where it’s just completely unknown people because I’d love that. In multiple languages, all over the world. It would be nice to distill all that into a Gorillaz project; disparate, obscure folk artists, somebody in Paraguay or Iceland, someone in South Korea… North Korea even. I don’t know how that would go down but hey, anything is possible now.”

And how about Blur – have we heard the last of them?
“I really hope not. I love doing those gigs, they’re great, but it’s not something I need to do. I only do it because there’s a joy in doing it. It’s an absolute treat. I can’t wait to sing Parklife again.”