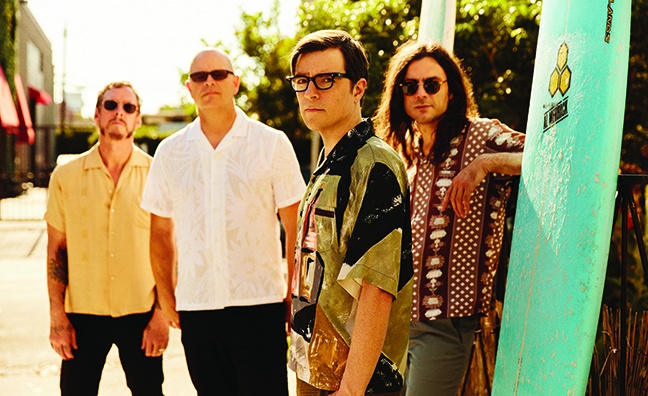 Today, US rock legends Weezer release their 11th album, Pacific Daydream (Crush/Atlantic). The album marks a new sound for the band but the veteran group has also changed the way it does business in order to keep themselves at the top.

The plan seems to be working as well: Feels Like Summer has become Weezer’s biggest US hit since 2008’s Pork And Beans, hitting No.1 on alternative radio and becoming a rare alt-rock breakout on some of Spotify’s pop-oriented playlists.

When you started the band, did you think you’d make it to album No. 11?

No. I thought by this stage I’d definitely have graduated to classical composition. In fact, I went to school after our first record came out and started studying diligently how to be a composer but, after a year or two of that, I got disillusioned and I’ve been a rock musician ever since.

Was that the right decision?

I don’t really know. Life is humbling and my 23-year-old self would be disappointed to see that I’m essentially doing the same thing I’ve been doing since I was 14. Like, shouldn’t we have grown up by now? But this spot I have here in the world, this little piece of turf that Weezer are in, it still feels like the place from which I can have the biggest effect on the universe.

The current climate is tough for rock bands. Were you surprised that Feels Like Summer became such a big hit?

Maybe I’m just totally deluded but I guess I just take it for granted that we’re always going to figure out to have a big new song for a new generation of music fans. But if you think about it, it’s not easy to do, you really can’t take it for granted and most of the time we fail. But now it feels like business as usual.

The new album has a very different sound…

We’re excited about this record because we think it’s the most different record we’ve ever made in relation to our core sound. That downstroke, power chord, distorted guitar thing is a great way to write pop-rock music but we couldn’t escape from it. I would try to write very different-sounding songs and then, as soon as we start playing with the band, suddenly I’m stepping on the distortion pedal and it sounds like Weezer again. But this time we finally managed to come up with something really different.

Does having such a passionate fanbase make it harder to move on?

It did for a while. There were definitely some conflict-filled years. We came up before the internet, before messageboards and comments on your iTunes page or whatever, so we were in our own little bubble. When we first started seeing all that stuff in the early 2000s when we put out The Green Album, it was a real shock. There were different stages of rebelling against what they wanted and then conforming to what they wanted, trying to ignore what they wanted… But now we’ve lived with it long enough and most artists today have figured out how to have their own creative space and be in touch with their own sense of direction in spite of this instant access to the hive mind.

You wrote with Jonny Coffer and other songwriters for this record. Are you more at ease with the co-writing experience now?

I think there’s a place for it on every record. This is a theme that I’m seeing not just in my life, but everywhere. When innovations come in, new technologies, new ways of working and organising, they don’t completely replace the old ways, they just find a place in the mix. As years go by, new ways will come in I’m sure. I can’t imagine what. Maybe we’ll be writing with Artificial Intelligence or a robot or something. A couple of songs on each record will be written with Alexa or something, a couple with Jonny Coffer and then a couple by myself. We’ll just mix it up.

Recent Music Week research showed it now takes 4.53 people to write the biggest hits. Is co-writing what rock bands need to do to compete nowadays?

I do think this is a much more collaborative time than the ‘90s. I don’t know that for a fact, maybe you could do a comparative survey of the chart from the ‘90s? But it’s a cool thing. Great things come out of collaborating. If people were writing songs by themselves that were as good as or better than these songs that were written through collaboration, then you’d see more of them on the charts. Collaborations produce really strong results.

Are you a fan of streaming?

I love it! I listen to so much music I would never have discovered in the CD era, because it would be a pain to go get it all. Even in the download era, even though it was just 99 cents or whatever, you felt that every time you were a little less likely to take a gamble on something you don’t know. But Spotify takes you into the hinterlands of who knows where, just checking out everything.

Is it hard for a rock band to get traction on streaming though?

It’s so easy to see on Spotify where you rank, literally, compared to all the other artists in the world. They tell you, Weezer is No.342 right now. It’s really humbling and, at the same time, it really lights a fire under our butts. We want to climb the ranks. In the rock world, we’re right up there with the biggest of them. Now we see the data for the whole world, we’re small fish in the big pond.

Do you get involved with the business side of the band?

I have gotten very involved in the past. For a few years, I managed the band, during the Green Album period. I enjoyed it, I was halfway decent at it, but it was hard to write songs if I just got off the phone trying to negotiate a merch deal. So eventually I decided I would focus on being an artist.

Are you looking forward to playing Wembley?

Of course! This is huge for us, because we’ve been at the Brixton [Academy] level for 20 years. Brixton has been great, we had a great run there, but we always had our eye on getting to the next level and just the name Wembley to Americans is such a thrill. It means so much to us that we’ve graduated to the Wembley level now.

To read the full interview with Cuomo and Team Weezer, see this week’s print edition of Music Week, or click here.