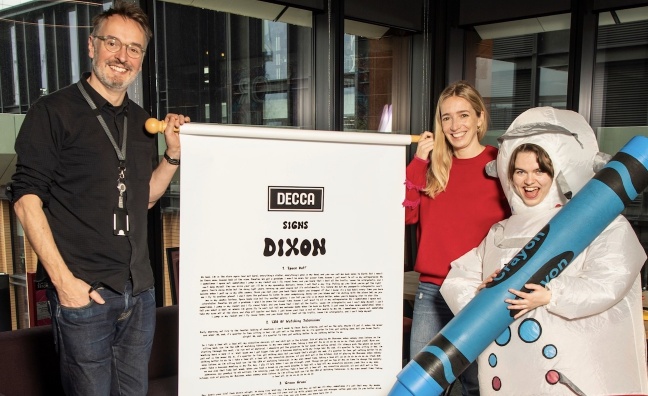 Decca Records has announced the signing of Ellie Dixon, a “true next generation artist”.

Dixon has been making waves with her self-recorded pop music, primarily on TikTok, where she has over one million followers.

Decca co-presidents Laura Monks and Tom Lewis (pictured above with Dixon) said that they’ve signed an act who operates outside the parameters of the traditional music business. Earlier this year, the label signed Downton Abbey duo Michelle Dockery and Michael Fox.

Monks and Lewis said: “Ellie Dixon is the epitome of self-built. A true next generation artist thinking outside the confines of the traditional music market. She does it all, from writing and recording to mixing her self-released EP and directing all her own visuals. Her success to-date growing her global fanbase in mere months speaks of her amazing talent, abundant creativity and engaging personality. We are extremely proud Ellie is joining the Decca family.”

Pictured arriving at Universal Music’s London Headquarters in King’s Cross, dressed in a space-suit (as a nod to her EP opener Space Out!) and carrying a giant crayon with which to sign the contract, Ellie Dixon is delighted to be joining the roster at Decca Records.

Dixon, whose most recent release is the Crikey! It’s My Psyche EP, said: “'I'm so happy to be signing with Decca Records! It was clear from the moment we met that they understood the music I make, who I am as an artist and shared the vision I had for my future in the music industry. As we got to know each other, I felt so much love and positive energy from the whole team - it’s a perfect match really. It’s also amazing to be partnering with a label that has so many incredibly talented and passionate women working across all departments. I have so many bonkers ideas that they are already fully supporting and throwing themselves right into - I can't wait to see what this exciting new chapter holds.”

Dixon has enjoyed support from BBC Radio 1 and BBC Introducing and is touring the UK from March. She has more than five million Spotify streams to date and new music is expected soon.