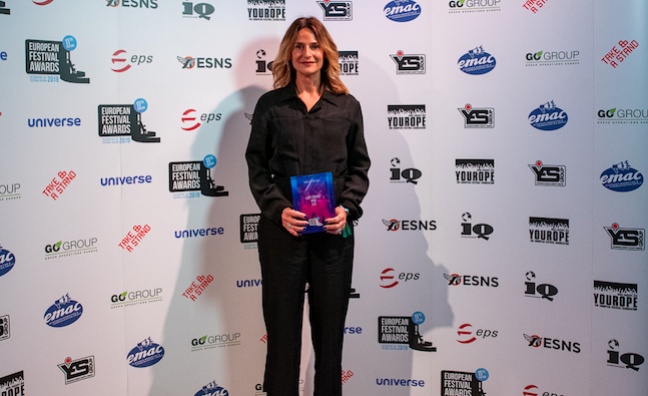 In the British music business, the Dickins family is like London buses – three of them tend to come at once. Or at least that's how they appeared in Groningen, Netherlands at the Eurosonic Noorderslag conference and festival for a keynote about the family's combined role in the music business.

Father Barry – agent extraordinaire, founder of ITB – shared the stage with son Jonathan, founder of management company September Management, which counts Adele among its clients, and daughter Lucy Dickins, the agent who worked at ITB before joining global agency WME in May 2019, taking with her some clients including Adele and Mumford & Sons. She had just been named agent of the year at the 2019 European Festival Awards.

Uncle Rob, who ran Warner Music UK in the 90s and 00s, was not present in Groningen, but was the source of a couple of jokes from brother, niece and nephew.

For the first time, all three were sharing the same stage to talk about their careers, the state of the industry and, of course, what it means to work as a family in the same business.

“I made both their careers and I'm still waiting to get a Christmas present from my son,” quipped Barry, prompting this response from son Jonathan: “I don't believe in Christmas.”

Lucy, sister and daughter, explained that what looks like arguments – and there were a few on stage in particular about the respective merits of rap vs. rock – are in fact the expression of opinions.

“We are opinionated,” she said, “but when we argue, it's more opinions than arguments.” To which Jonathan added, “When we work together, the family is left at the door. We have to do the best job for the project at hand and I can be harder on her because she is my sister.”

One topic that was devoid of arguments was Adele. Both Lucy and Jonathan saw something special in her and ended up working with her, unbeknownst to each other, although they both claim they “discovered” the aspiring singer.

“Someone said that I should check her out,” said Jonathan. “At the time my office was my house and she came for tea, I met her there and we started working together.”

Lucy's version: “I met her through a friend who came with her and I'll never forget it. She said she was a singer and said 'Do you want a CD?' I said yes, and she turned to the other person and said 'Oi, give me back my CD, I want to give it to her'. And after the first song I played, I said this is insane, so I called Jonathan.”

And the rest, as they say, is history, leading to record sales and sold out tours, including stints at Wembley Stadium. “Adele opened doors for a lot of artists,” said Jonathan, reminding the audience that when Adele's first album came out, she was “just about selling the Roundhouse.”

Asked how they would recognise a hit artist, Lucy responded: “I don't think you do know, it's always about gut feel. [In the case of Adele] it is very rare that something like that comes your way. She blew me away song after song.”

Both Jonathan and Lucy hinted that new recordings from Adele should be expected in 2020, “and the sooner the better,” said Jonathan.

Adele blew me away song after song

Father Barry talked the audience through his career, starting with working at the age of 17 for six months for The Who and organising a concert with Jefferson Airplane and the Doors.

“With ITB, we started doing well in 1982, and did not owe any money to any one at the time,” said Barry. Later, ITB was acquired by Live Nation and after 14 years, Dickins and his partner bought the agency back.

Lucy paid tribute to her father over her decision to leave ITB to take a job at WME. “Every decision of leaving ITB was discussed with my Dad and he said whatever you do, I will be supportive of, and it meant a lot to me,” she explained.

Jonathan seconded that emotion: “I think you needed to move away from the family and there's emotion involved,” he said. “Lucy did it and had the guts to do it, and Dad was an adult in the way he handled it all. She is a great agent and he was losing someone who's great, but he is also a Dad, and all credit to both of them.”

Jonathan also discussed the new market environment, reflecting on topics widely discussed at Eurosonic. “Deals are fairer, more flexible and there's more choice,” he said. “We need disrupters in this business, and Kobalt made everyone look at their business. It is way more transparent. And, overall, there is an easier route to market than before.”

If you think you are bigger than the artists, this is where you are going wrong

This theme was picked in a separate panel by Paul Hitchman, president of Kobalt's artist services division AWAL, who noted that “transparency has a long way to go.”

He added: “That's a principle the industry should embrace. Any data we collect we share with artists. People in business should be sharing data, sharing information. The problem with a lot of the incumbents in the industry has been to focus on their share of the pie rather than increase the size of the pie.”

Hitchman said AWAL's model is to be “aligned with creators.”

He elaborated: “We think this is a good business principle as well as a moral principle. We work for artists rather than artists work for us. If you think you are bigger than the artists, this is where you are going wrong. We now we have a roster that is more than a match for the majors, we have nine offices, and we are really the alternative to the majors.”

Hitchman's assertion that in today's market “artists need to be entrepreneurs” was an echo to an earlier session in the morning MiDIA Research principal Mark Mulligan, who attempted to “shake up” the audience by declaring that a global recession was looming, which could impact revenues from streaming subscriptions. In the long term, he added, revenue growth from streaming will slow down.

But the key takeaway from the recent market developments was, according to Mulligan, “the rise of the independent artist,” who represent “the fastest growing part of the recorded music business, with artists' direct revenues and label services revenues reaching $1.580 billion in 2018”.

“We are at the cusp of really big changes,” said Mulligan. “There is a new generation of artists who do not want to play by the old rules. And some companies are based on the needs of these people. Artists like Stormzy, who has a real keen business sense, change the game. Stormzy set up his company, signed a publishing deal with Warner Chappell, gets an advance, which lifts pressure on him, so when Warner [Music] was chasing him he said did not need an advance, and made a distribution deal.”