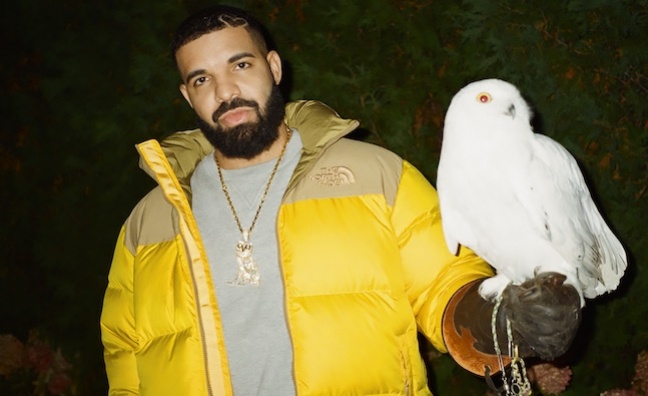 Drake has scored his fourth No.1 album with Certified Lover Boy (Island/OVO/Republic), but it had to come from behind to do so.

Iron Maiden set the pace with Senjutsu (Parlophone), which was ahead for much of the week. But as Music Week has reported, the albums chart is increasingly moving from a purchase model to a consumption model.

Drake was the latest beneficiary of that shift, in a chart battle between two huge acts but also between physical music and streaming. The 21-track album from the Canadian superstar racked up 70.4 million streams in the UK alone, according to the Official Charts Company.

The digital-only Certified Lover Boy finished on 45,651 chart sales (43,623 from streams). The result is down on the first week of Drake’s last album proper, Scorpion, which opened with 63,690 sales in July 2018 (again, there was no physical edition in week one).

Iron Maiden continued to sell strongly through the week and ended with a total of 44,473 for the well-received Senjutsu (including 39,032 physical copies), a drop from the opening sale of 60,249 of its predecessor The Book Of Souls. Nevertheless, it is the biggest sale for a No.2 album since Little Mix's Confetti opened with 49,887 sales in November last year. Iron Maiden’s Senjutsu made No.1 on the vinyl albums chart.

Little Simz made a commercial breakthrough with her album, SomeTimes I Might Be Introvert (Age 101/AWAL), at No.4. The Music Week cover star opened with 10,151 sales.

Drake was held off No.1 on the singles chart by Ed Sheeran’s Bad Habits, which made it 11 weeks at No.1. Drake did secure three Top 5 singles (OCC rules limit primary artists to three tracks), including Girls Want Girls feat. Lil Baby at No.2 (65,141 sales). Previously, he managed three simultaneous Top 5 singles in 2018, following the release of his Scorpion album.

ABBA Gold re-entered the albums chart Top 5. It is the second best-selling album of all time in the UK.