Ed Sheeran and Taylor Swift chasing No.1 with The Joker And The Queen 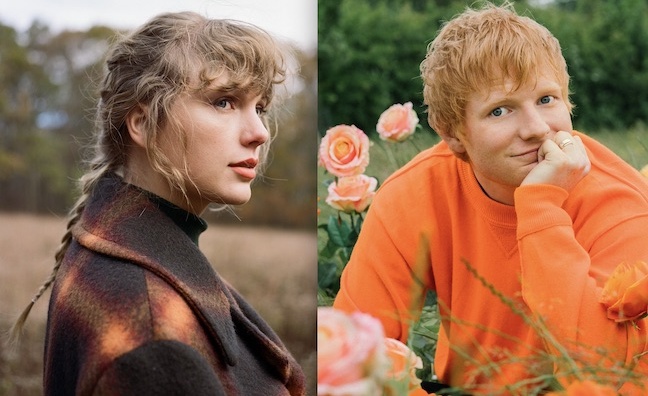 Ed Sheeran and Taylor Swift are in hot pursuit in the race for this week’s No.1 single.

Based on preliminary sales and early streaming reports from the Official Charts Company, Ed Sheeran’s new duet version of The Joker And The Queen with Taylor Swift is at No.2.

According to the Official Chart: First Look, We Don’t Talk About Bruno from Encanto is still at No.1 at this early stage of the race. But Ed Sheeran and Taylor Swift have made a huge chart impact following the release of their duet on Friday (February 11). The addition of Swift to the track from Sheeran’s chart-topping = album has seen consumption increase by almost 1,000% week-on-week.

If The Joker And The Queen did make it to the summit, it would be the 13th UK No.1 for Ed Sheeran (or 14th if you count his appearance with Elton John on Ladbaby’s Sausage Rolls For Everyone), and a second for Taylor Swift.

The UK and US superstars share a friendship that spans well over a decade. The Joker And The Queen is Swift’s and Sheeran’s fourth official collaboration to date, following on from Everything Has Changed (2012), End Game (2017) and Run (Taylor’s Version - 2021).

Sheeran performed the song at the BRITs, where he was named Songwriter Of The Year.

Sheeran earmarked Swift as the perfect guest vocalist for the track and later reached out to invite her to record her vocals. The track was written by Ed Sheeran, Taylor Swift, Johnny McDaid, Fred Gibson and Sam ‘Romans’ Roman, and produced by Ed Sheeran, Fred, Johnny McDaid and Romans. The string arrangements were provided by Ed Sheeran’s brother, Matthew.

The accompanying Emil Nava-directed video brings together the cast from the Everything Has Changed video, released in 2012. Ten years on, the video captures the coming-of-age story of the now 18-year-olds, Ava and Jack.

In the Official Chart: First Look, Ed Sheeran is also at No.3 with Fireboy DML collaboration Peru. As that counts as a feature for Sheeran, he is permitted two other entries under chart rules: Bad Habits (No.16) and Shivers No.17, both chart-topping singles from the = album.

Elsewhere, Sam Fender’s Seventeen Going Under has experienced a leap in consumption and climbed a place to No.6, following his BRITs performance.