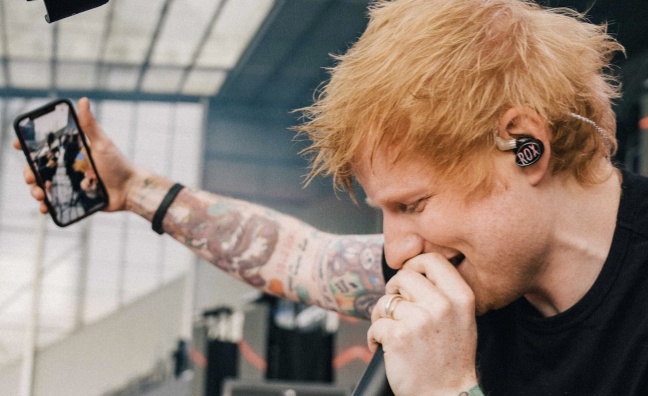 Ed Sheeran’s campaign for Bad Habits has only just begun, but the chart-topping star is already breaking new records.

His livestream from Ipswich Town’s Portman Road stadium has become the most viewed live music performance on TikTok, drawing more than 5.5 million views across the initial livestream and two subsequent replays. Views are set to rise further when the performance is made available again on July 9.

Staged as an official show for Euro 2020, the gig streamed worldwide on Sheeran’s TikTok channel, which commands 23.7m likes and 5.5m fans. The performance used augmented reality and specially designed staging for vertical video, as Sheeran spoke to fans via a mobile phone. Sheeran premiered comeback single Bad Habits, which is surging towards a No.1 finish in the charts this week.

The performance was made by director Emil Nava and Hamish Hamilton, alongside Sheeran and his label Atlantic Records. TikTok creators Jeremy Lynch, Nathan Ramsay and Letitia Stock were all involved.

Paul Hourican, head of music operations, UK, TikTok said: "The TikTok UEFA 2020 show was an incredible moment for our community around the world and a watershed moment for live music streaming. Alongside the numbers, Ed's unmissable live show has creatively raised the bar as to what is possible within the the live streaming format and demonstrated the scale and ambition TikTok can deliver for artists. Thank you to all our partners who worked so tirelessly to bring this to life and of course to Ed himself for demonstrating once again, why he is one of the greatest artists of his generation."

Ed Howard, co-president of Atlantic Records said: “We are thrilled to see Ed make history again following his fantastic TikTok UEFA 2020 show performance and release of Bad Habits. Uniting and engaging his global fanbase was imperative for Ed, Grumpy Old Management and Atlantic as we kicked-off his new campaign, and our close partnership with Paul and the whole TikTok team enabled us to realise that ambition in a uniquely creative way. From the intricate creative direction by Emil Nava to the cameos from the wider TikTok community, Friday proved to be a ground-breaking event that generated huge excitement amongst Ed’s fans worldwide. Deservedly it has become the most-viewed artist performance in TikTok history and we’re excited to see Ed’s footprint continue to grow on the platform.”

Ed Sheeran announced the show with a video featuring David Beckham, and the pair watched the England football team’s victory over Germany side by side at Wembley Stadium.