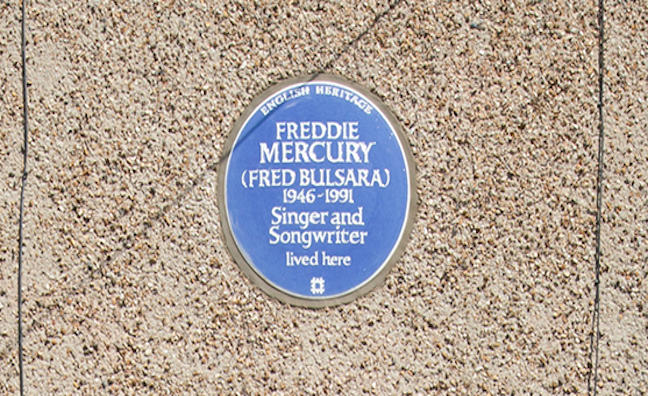 English Heritage has honoured the life and work of legendary Queen front man Freddie Mercury with a Blue Plaque at his first home in England.

The terraced house in Feltham, West London was bought by Mercury’s parents in 1964 after the family left Zanzibar for UK shores. He still lived there when he first met his future Queen bandmates.

Other musicians to be honoured with an English Heritage Blue Plaque include Jimi Hendrix, John Lennon and Wolfgang Amadeus Mozart.

The plaque was unveiled by Mercury’s sister Kashmira Cooke, who said: "Mum and I are so proud and pleased that English Heritage is honouring our Freddie with a Blue Plaque, and that he will be amongst other famous names for ever. Secretly he would have been very proud and pleased too."

Mercury’s bandmate, Brian May, added: “It is a pleasant duty to help install this little reminder on Freddie’s parents’ house in Feltham. It was here that I first visited Freddie soon after we had met through a mutual friend. We spent most of the day appreciating and analysing in intimate detail the way that Jimi Hendrix had put his recordings together in the studio - listening to Hendrix on vinyl played on Freddie's Dansette record player - which had stereo speakers on opposite sides of the box! Feltham was the childhood neighbourhood for both of us but we never knew it until we met in the cause of music.”

Sir Peter Bazalgette, English Heritage Blue Plaques panel member, said: “Before Freddie became Freddie Mercury, this small house was where he lived and took the first steps towards stardom. English Heritage’s blue plaques celebrate the great men and women whose achievements endure and Freddie Mercury – singer, songwriter and producer – was certainly one of our greatest musical talents. He was truly a champion.”

Karen Bradley MP, the new secretary of state for culture, was also in attendance at the unveiling: “Freddie Mercury is a global icon whose music touched the lives of millions of people around the world. I am delighted that one of Britain's most influential musicians will be recognised through the Blue Plaque Scheme - a small but important reminder to people of the impact he had both in London and well beyond.”