Goat Girl explain why the world needs their new record 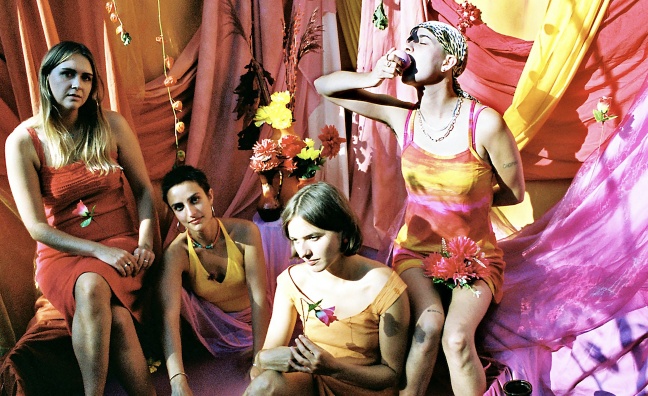 Goat Girl guitarist Ellie Rose Davies has emphasised that “music has the power to change your reality” as the band release their second album.

On All Fours is out now on Rough Trade, occupying the No.7 slot at the first midweek count. The label is also enjoying success for Sleaford Mods’ Spare Ribs, which recently debuted at No.4 and has 8,079 sales to date, according to the Official Charts Company.

“A song can change your day, cheer you up, or allow you to cry about what you've been holding in,” Ellie Rose Davis, who goes by LED, told Music Week.

Rough Trade’s joint MD Geoff Travis said the label is proud to support the London-based band as they return with the follow-up to 2018’s self-titled debut.

“I am excited for the release of the new Goat Girl record,” Travis said. “There has been an evolution in their sound with the use of electronics and a wider musical palette. Their viewpoint, which is uncompromising and serious and pinpoints their social consciousness chimes with the ethics and morality of Rough Trade.”

Goat Girl starred in our On The Radar column in 2017, and have since cemented a reputation as one of the UK’s most exciting independent acts. Their original bass player Naima Jelly left the group in 2019, with Holly Mullineaux (aka Holly Hole) joining soon after. The band – completed by lead singer and guitarist Lottie Pendlebury (aka Clottie Cream) and drummer Roy Jones (aka Rosy Bones) – pursued a more electronic direction for the new record, which houses lyrics that chime with the uncertain world into which they have released it.

Following Top 10 new records for a slew of independent acts including Shame, Passenger, Bicep and You Me At Six (with Arlo Parks also set to chart this week) Goat Girl’s album arrives as another powerful document. Here, Ellie Rose Davies tells Music Week its story.

The main themes on the record seem very well matched to the context it's coming out in. How does it feel to be releasing this album now?

“It's actually really strange how relevant some of the lyrical content is – even more so now, than perhaps when it was written. It definitely feels like the right time for it to come out – we all need music and art in such unparalleled times, it's therapeutic.”

What's your favourite song on the record and why?

“It would be unfair to the others to pick just one, but I'm really into Where Do We Go? right now. I think it's one of Lottie's finest lyrical moments, Holly's harmonies are ghostly, and Rosy's drumming… Epic! I'm very proud of the synth I played on that song. Everyone in the band adds so much to that track in their own way.”

What was the band's main aim going into this record?

“We didn't really set out with an aim at all, but through the process of writing the record, we've established a much more communal and laissez-faire approach, and we've learnt a lot about each other, and ourselves. As always, we hope to broaden the listener's perspectives in order to create a deeper sense of understanding and compassion among human beings.”

We all need music and art in such unparalleled times, it's therapeutic

How has Goat Girl evolved since the last album?

“We've explored the insular side of things lyrically, we've messed with synths and drum machines, we've got a few years older, wrinklier.”

How have you dealt with playing lots less and everything else the pandemic entails? Has it hit the band hard?

“It's a shame we can't play live, but there's no point in getting too hung up on things we have no control over. We're doing our best to act on the things we can still do and have fun with, like redesigning our aesthetic – working with amazing artists like Toby & Aidan Evans-Jesra, Flo White, Holly Whitaker, and film-makers Jocelyn Antequil and Molly Pendlebury.”

What's it like to be in an independent band now? The world is so different to the last time you put a record out.

“The present state of affairs has shone a light on the fact that music is a truly powerful source. Whether you're a listener or a musician, music has the power to really change your reality, which has been so important recently. A song can change your day, cheer you up, or allow you to cry about what you've been holding in. The future is going to be different, but I'm hopeful that we can adapt to the climate in a way that's safe and enjoyable.”