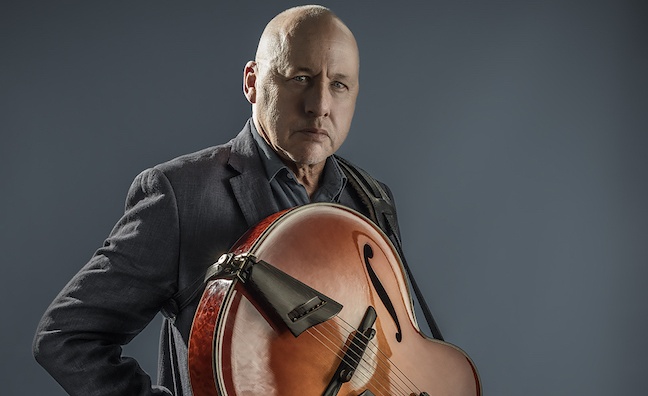 The former Dire Straits frontman is pushing for a Top 10 finish with his ninth solo album, Down The Road Wherever. It’s a busy Q4 week with big releases from Michael Buble, Mumford & Sons and Little Mix.

Knopfler scored Top 10 international chart placings for his 2015 album Tracker. It peaked at No.3 in the UK and has sales to date of 69,041, according to the Official Charts Company.

“It’s such an enormous record in terms of its appeal,” said Cockle of the new album. “There is such global enthusiasm for him. America is still an enormous market for Mark.”

Cockle stressed that Knopfler is an artist who’s focused on making music and touring, rather than social media or promotional duties.

“Mark is a different character - the motivation for him is that he just has to create music,” he said. “He’s an older artist and still does 400-500,000 records around the world each time.

“It’s phenomenal for somebody who let’s just say is not looking forward to being on sofas and chat shows and doing that promotional treadmill. He just wants to create music, put music out and get on with the day job.”

He just wants to create music, put music out and get on with the day job

Knopfler has sold around 120 million albums with Dire Straits and as a solo artist. Songs on the new album are inspired by, among other things, his early days in Deptford with Dire Straits.

“He does exactly what he wants to do, I don’t think he worries what else is going on in the world at this point, there’s no fear of trying to be hip,” said Cockle. “He just goes, ‘This is what I do, I believe I do it very well indeed.’ He’s what we could call best in breed.”

Knopfler’s label boss singled out some of the song titles on this record for particular praise.

“I’m obsessed with his song titles,” said Cockle. “If you pay attention, song titles I like on that record include Good On You Son and My Bacon Roll.”

Knopfler and his band will be playing the new songs on a world tour in 2019, including UK dates in May. He plays The O2 on May 28.