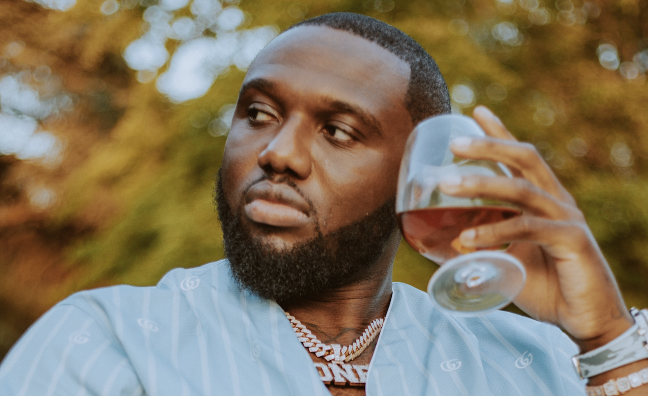 As Headie One bids to reach No.1 with his debut album, Relentless Records president Shabs Jobanputra has told Music Week that it is a landmark moment for the North London rapper.

We caught up with Jobanputra and Headie One’s co-manager Adnan Masud, who runs O'DiVision Management alongside Lovelace Owusu-Sekyere, to discuss what is already turning into a monster campaign.

With the artwork for Edna – which is named after the Tottenham MC’s late mother – plastered across billboards around the world, statues of the rapper have sprung up across London. Jobanputra explained that the label’s marketing push is designed to hammer home the message that Headie One has made “the definitive drill album”.

“This is the one body of work you need to have to understand this area of music and this artist,” said Jobanputra, who signed Headie One before the release of Know Better early in 2018.

“The scale is important, we’re using TV, outdoor and a much broader cross section of media at what we feel is the right time, to really get Headie and his story across,” he continued. “This is a a culmination of this area of music. Headie, the album and its quality sum it up.”

On the question of reaching No.1 and delivering Headie One’s best chart placing yet, Jobanputra said Relentless is “reaching for the stars”.

Powered by intro tracks Only You (Freestyle), a collaboration with Drake that peaked at No.5 and has 206,856 sales to date according to the Official Charts Company, and Stormzy/AJ Tracey cut Ain’t It Different (290,874 sales), the 20-track Edna also features Skepta, Young T & Bugsey, M Huncho, Future, Young Adz, Mahalia, Ivorian Doll, Aitch, Kenny Beats, Haile and Kaash Paige. Ain’t It Different could reach a new peak this week, as Edna impacts the singles chart.

It follows Gang, Music X Road and Drillers X Trappers II, The One Two and The One as Headie One’s sixth project with Relentless. The rapper has 6,495,584 monthly listeners on Spotify and Jobanputra emphasised the importance of the volume of music he releases.

“We’re reaching a milestone in Headie’s career, we’ve been building to this for quite some time since we signed him,” he said. “He’s been very prolific in his work, putting out a lot of music and it follows our philosophy of what we do with all our artists, releasing music when they feel.”

The president said that, following the rapper’s time in prison at the beginning of the year, the release is “an important spiritual career moment for Headie, and we’re really proud that he feels good and strong”.

“After being incarcerated earlier in the year, to then have your biggest record, which follows a duet with Drake, it shows what you can do if you put your mind to it,” he added.

Co-manager Adnan Masud told Music Week Headie One’s story has been one of natural growth since they began working together in 2017, having grown up side by side in Tottenham’s Broadwater Farm Estate.

“Headie had been in the streets for years doing music, obviously in and out of jail and stuff like that, but once he came out and knew he wanted to do music, he just got on with it,” said Masud. “You know how it goes, you conquer North London first, then you conquer the whole of London, and now it’s a global situation, three years later.”

Masud and Owusu-Sekyere’s O'DiVision Management company has grown alongside Headie One, who has also founded OFB Clothing and One Records. He praised Relentless and said their relationship has “changed all our lives”.

“The relationship has become so natural, they understand what background we’ve come from and what our music represents,” said Masud, who is happy Edna is finally out, following a #FreeEdna social media campaign.

This is the moment we were always waiting for

“I had a moment recently where I thought this album is where it’s meant to be in terms of the sound and how Headie has articulated himself to put everything together,” he said. “The music on this album is literally his whole life. I don’t think even 20 songs is enough to explain it all. The way he’s put it together, the level of production, the level of everything has just been x10. When we look back at where we started, this is the moment we were always waiting for. We wanted to master what we started, we never wanted to lose our sound or our authenticity. After all the hard work, it’s nice to see it on a big scale.”

* Subscribers can revisit Music Week’s 2018 special report on drill here. Look out for more from Headie One and his team in the magazine and on musicweek.com very soon. To subscribe to Music Week and never miss a vital music biz story, click here.