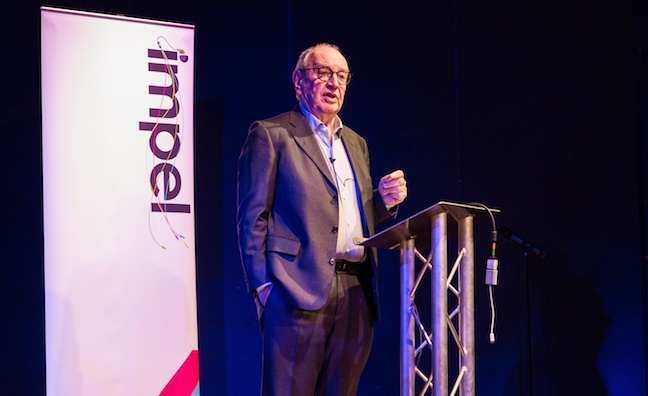 A host of industry figures have been recognised in the Queen’s Birthday Honours list for services to music.

Music biz veteran Andy Heath is made a CBE and Live Music Now founder Ian Stoutzker has been awarded a knighthood.

UK Music founding chairman and current Beggars Music chairman Heath (pictured) previously received an MBE for services to music publishing in 2009. "Wow - I'm really thrilled, surprised and honoured. I have always taken great satisfaction and pride in the British music industry and have tried to serve its best interests," he said.

"It's an industry that has provided the world with a great cultural contribution and has punched well above its weight commercially. I honestly feel that this award is as much for the creators and business people in British music just as much as it is for me."

UK Music CEO Michael Dugher said: "These honours are a fantastic achievement for UK Music and mark a bumper year for the British music industry.

"I'm particularly delighted for our founding chairman Andy Heath. Over many years, he has worked tirelessly to fundamentally change the perception of the UK music industry in the corridors of power and ensure we get a seat around the table and that Government listens to our views. There is no doubt that the voice of the UK music industry is stronger, more unified, more respected and more influential, and that is down in large part to the talent and personal dedication of Andy Heath. He richly deserves this important honour, as well as all of our gratitude.

"I'm also really pleased for Jackie Alway. She has been a passionate voice for music publishing and she too has represented UK Music with great distinction, including on international trade matters. Her impressive professional career and her role as chair of the MPA has been a great asset to us all.

"And it's excellent news that UK Music's first CEO and my good friend Feargal Sharkey has been honoured. He made a significant contribution on behalf of our industry and he remains a role model for working class kids everywhere who want to get out there and make great music. I know there are others in the music industry who deserve recognition. I am determined that our industry continues to have a powerful voice and that UK Music goes from strength to strength as an industry organisation that is second-to-none."

Ian Stoutzker founded Live Music Now (LMN) in 1977 with the late Yehudi Menuhin. LMN has grown to be the UK’s leading provider of thousands of interactive music programmes to a diverse range of people that rarely, if ever, have access to live music in places such as special schools, care homes and hospitals.

“Yehudi Menuhin’s experiences performing during the Second World War to the sick, wounded and lonely combined with his abiding concern for the development of our most talented young musicians were the inspiration for the formation of Live Music Now," said Stoutzker. "We could hardly have imagined that we were embarking on an adventure which would create a charitable and cultural institution at the heart of Britain’s musical life. I wish to take this opportunity to thank all the thousands of people who have been involved in making LMN the great success it is and I know that its work is still as vitally needed as ever.”

Karen Buse, MD of European relations for BMI and previously long-serving PRS For Music exec, is also made an MBE. Buse, who joined the Music Week Women In Music Roll Of Honour in 2017, told Music Week: “I am thrilled, stunned and humbled. It is really an honour to serve creators of music all over the world and I’d like to thank everyone who continues to support me.”

And Bauer Media UK's Group MD, Dee Ford, picks up a CBE for services to radio. She has run Bauer's radio interests, which include Absolute, Kiss and Magic, since 1998.

“Many congratulations to Dee, leader of our UK radio business, and now a CBE in recognition of her awesome and distinguished contribution to the industry," said Bauer Media Group president of audio, Paul Keenan. "From starting in sales in Radio City in 1987 to building one of the world’s best radio businesses, Dee is a legend. Congratulations!“