House party: All the numbers behind a mega chart week for Harry Styles & Harry's House 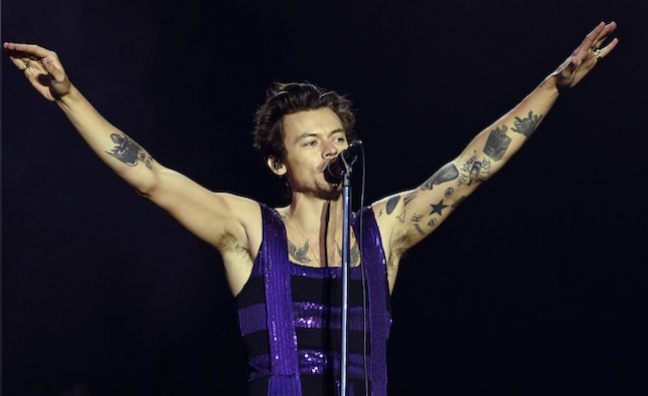 Harry Styles has set a new record for the fastest selling vinyl album this century, as Harry’s House rocketed to a No.1 finish in the albums chart. And that stat is just the tip of a quite considerable iceberg.

Debuting with 113,812 total sales, Styles’ third solo full-length is now officially the fastest selling album of 2022, shifting more copies than the rest of the Top 20 combined. Styles scored the biggest first week sale since Adele’s 30, which debuted with 262,000 sales last November. It is also the first album to pass 100,000 sales in a week since 30 did so in its second week.

Last November, ABBA’s Voyage set a new record for week one vinyl sales in the 21st century, shifting 29,981 copies. But now, with five editions across standard, coloured vinyl and picture disc variations, Harry’s House has beaten that total, selling 36,041 vinyl copies (31.67% of its overall figure). The album topped this week’s vinyl chart, outselling the rest of the Top 40 combined. Fine Line, incidentally, also opened at No.1 on the vinyl chart, with its total of 9,419 vinyl sales putting Styles’ growth into context.

Harry’s House performed impressively across all formats, selling 6,878 copies on cassette and 21,766 copies on CD, posting an overall total of 64,685 physical sales. The album racked up 45,388 sales from streams and 3,739 from downloads.

It sets a new personal best for Styles as a solo artist, outstripping the week one figures for 2017’s Harry Styles (56,630 sales) and 2019’s Fine Line (49,082 sales). It is his second No.1 album as a solo artist and his sixth in total, including four as a member of One Direction. Albums by the group recorded more than 100,000 sales in a week seven times, with third full-length, Midnight Memories the best performer, moving 237,338 copies in November 2013.

The release of Harry’s House brought an inevitable chart double for Styles, the second of his career after One Direction achieved the feat in 2012 with Little Things and Take Me Home.

Behind it in the Top 3 are Harry’s House tracks Late Night Talking (52,214 sales) and Music For A Sushi Restaurant (45,690 sales). Each racked up more than five million streams. Styles is the first solo act to occupy the singles Top 3 since Ed Sheeran in March 2017. He is the first artist to secure a chart double this year, the last to do so was also Sheeran, with = and Elton John duet Merry Christmas back in December. Under pre-2017 chart rules, all 13 Harry’s House tracks would have been in the Top 17.

Columbia holds the record for the label with the most weeks at No.1 in the singles chart this year. Styles’ success this week also gives the major their second chart double of the year, the first coming when Arcade Fire topped the albums chart and Styles had the No.1 single earlier this month.

To celebrate release week in the UK, Styles played in the BBC Radio 1 Live Lounge and staged the London edition of his One Night Only show. He played Radio 1’s Big Weekend in Middlesbrough on Sunday. A pop-up merch shop was also open in London.

In the US, meanwhile, Harry’s House, debuted at No.1 with 521,000 sales. Vinyl consumption of 182,000 units set a new post-1991 record according to Billoboard chart data provider Luminate. The previous record for single-week vinyl album sales was set by Taylor Swift, with Red (Taylor’s Version), which sold 114,000 vinyl copies in November 2021. The vinyl sales for Harry’s House would have made the album No. 1 on the Billboard 200 in all but three weeks of 2022 so far.

Read our review of Harry's House here and our report from his One Night Only gig here. Our 2019 cover story, featuring Rob Stringer and Jeffrey Azoff, is here.