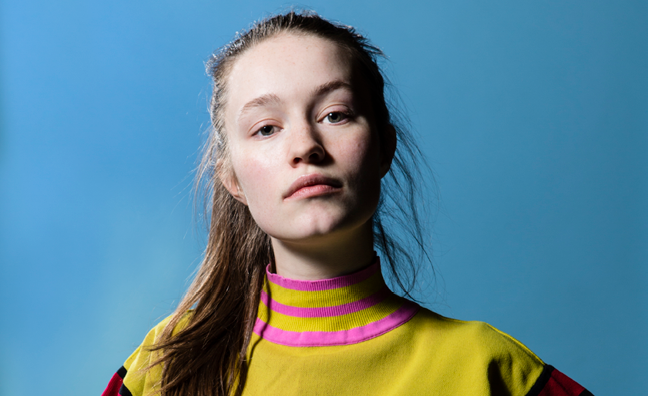 For this week’s cover story, Music Week embarked on a trip that began en route to Bristol from London, and took in Birmingham and Leeds.

We were following Sigrid’s sold out UK tour, watching the country fall head over heels for the 21-year-old Norwegian. Meanwhile, we caught up with the singer’s close-knit team, from Island’s senior A&R director Annie Christensen, to Made Management’s Geir Luedy, who began working with a teenage Sigrid in Bergen.

Sigrid’s journey has been far longer – from the piano by the wall covered in picture frames in her family home in Ålesund, to becoming an international pop prospect with 2 million global sales under her belt.

In our cover story, which subscribers can read online here, we chart Sigrid’s career from its beginning to the present day.

Here, we present an extract from a revelatory conversation, with Sigrid’s rapid rise, songwriting and the music industry all on the agenda.

Your career has progressed a long way in just a year. Do you feel things are happening quickly?

It’s been a journey, in a way. It is quick. It comes in phases, I’ll have so much going on in my schedule that I don’t have time to realise what’s going on. Then I’ll get home and sit on my couch in my living room and be like, ‘Oh my god, it’s actually happening!’. I think I had that moment weirdly enough on stage at Shepherd’s Bush. What was so unique about that gig is that it felt like the crowd and the band and I were leading the show together. I was as much led by the energy in the crowd as they were by my music. It felt like we were a tiny part of something else. I’m very humbled by the response.

Did winning the BBC Sound Of 2018 poll feel like a milestone?

The prize is about shining a light on my music, it’s a huge honour and it’s for my whole team, my band, label, booking people, publishing, management, all of us together. It’s very exciting, a big deal. It helps a lot, but it doesn’t mean that I’m going to be a big artist overnight. We’re trying to use the momentum of it to work towards our goals. We’re just continuing what were doing in the beginning, which is making good music and releasing it.

Your second EP is coming out in May, how is work progressing with the album?

Making the album is a big process, collecting songs from different times. I’m having a lot of fun working on it. Ocean Sound Studios is beautiful, situated in the middle of nothing in a way; it’s on a very flat, pancake island, 10 minutes from where I grew up. It’s beautiful, it can be very harsh weather, but it’s very nice to just get away from everything. It’s the perfect place to make good music.

I’ll get home and sit on my couch in my living room and be like, ‘Oh my god, it’s actually happening!’

It seems from the outside that your team is very close-knit, do you think you inspire something in people?

Maybe it’s the type of person I am? [Laughs] You need that communication, it’s really important to get to know each other. I spent a lot of time getting to know my team before I signed with Island. The first deal I did when I was 17, with Petroleum, I’d known the label for one year [before signing], after talking and having coffee meetings. The importance of knowing the team is enormous. I’m very lucky, that’s why we’re a strong, good team, because we talk so much. We’re always honest with each other and we communicate.

I have opinions [Laughs], that’s true. That’s why I’m an artist, I know how I want my songs to sound, especially the vocal sound, I want to sing the songs myself. It all comes down to my love for making music. A whole other thing I have to think about now things are growing is protecting my private life [in songs]. I try to channel things from experiences and then write about them in a more subtle way. I write all my songs in the first person, but it doesn’t mean it’s exactly what happened. It’s just a story, I’m a storyteller.

How much do your musical peers at similar stages of their careers influence you?

It’s impossible not to be influenced by other people, what musicians do is just steal from each other, it just depends where you’re stealing from. I try to steal from different genres and I’ve always listened to different genres because my family all have different tastes in music. All of us are into good songs. I want to create music that has a message, that has a nerve, I want to make music I love.

What’s your impression of the music business, are you getting used to it?

[Laughs] Since I had no experience of it, I didn’t know what it was, I thought someone just released a song and woof - it’s out there. What I can say is that I’ve been so lucky with my team. I love them to pieces. It’s a really good team; everyone is so resourceful, funny, talented and kind. They came to Bergen, I saw the enthusiasm, we had many different offers from different labels and they were all very nice, but it’s easy to see who’s in it for the long run. I could see Island is a label for people who love music and work really hard for it.

Catch up on Music Week’s On The Radar interview with Sigrid here.