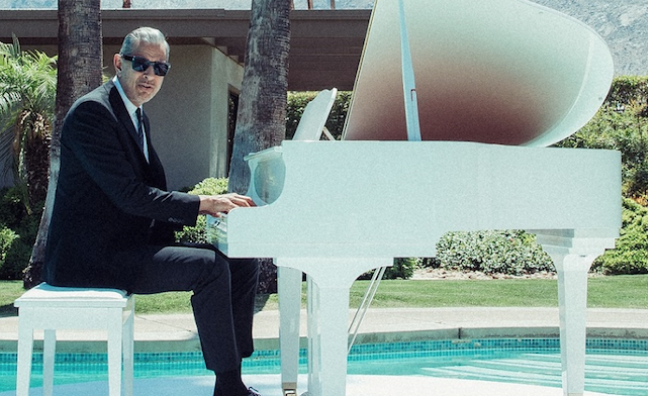 Jeff Goldblum has confirmed details of his second album for Decca Records, having previously revealed his plans to follow his 2018 debut live onstage at Glastonbury back in June.

Goldblum and his long-time band The Mildred Snitzer Orchestra will release I Shouldn’t Be Telling You This on November 1. The album is set to feature a host of guest appearances, including a duet with Sharon Van Etten on the first single, Irving Berlin’s classic Let’s Face The Music and Dance.

An official press release stated that there are “two more very special, chart-topping star guests to be announced in due course.”

Also of note, I Shouldn’t Be Telling You This will feature Goldblum singing on Little Man, You’ve Had A Busy Day, a song first released on Decca in 1934.

The album is full of sass

Speaking about the record, Goldblum said: “I’m crying with ecstasy over this new album. Creatively, I’m happy as a clam. This collection of cohorts (cream of the crop), with whom I get to cavort, is outa this cosmos. Ouch, my crackling cranium! I’m crowing!”

Tom Lewis, vice president of Decca Records, added: "Jeff Goldblum is the Pied Piper of Jazz. He has lured an incredible array of indie, soul and pop kids away from their existing musical homes and led them towards his magical world of jazz. The album is full of sass, cool, swing and vim. We’re so lucky to have Jeff Goldblum in our musical lives.”

Last time around, Goldblum landed a No.1 jazz album in both the UK and US with his debut The Capitol Studios Sessions.

For Music Week’s huge Christmas double issue last year, Jeff Goldblum reviewed some of 2018’s biggest songs – click here to find out what he thought of Bring Me The Horizon and more.