'I've been trying to channel this album reaching people way outside of country music': Inside Kacey Musgraves' bold new record 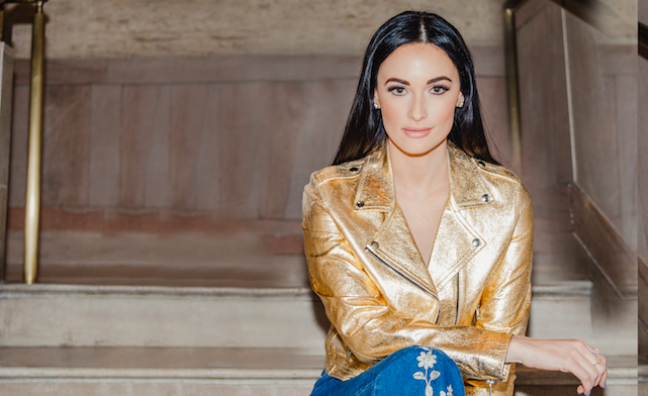 In the new issue of Music Week, we welcome country superstar Kacey Musgraves to our cover as part of a huge Nashville special. Ahead of her highly-anticipated headline performance at this year’s Country To Country Festival, Musgraves, her manager Jason Owen and Decca’s Rebecca Allen give us an in-depth guide to her new album Golden Hour.

In the interview, Musgraves opened up about the change in approach to both her lyrics and sound on Golden Hour, which is set to be released on March 30 via Decca/ MCA Nashville. The album - heralded by the twin-singles Butterflies and Space Cowboy – sees Musgraves collaborate with some new songwriters for the first time, including Ian Fitchuk and Daniel Tashian, and shows off a more diverse array of her musical influences.

“I’m really excited and anxious for everyone to hear the album,” Kacey told Music Week. “I’m not going to lie, it was a little daunting. There’s a lot of traditionalists, especially in the Americana world, that feel you almost have to prove how country you are, or stay a certain type of country to be country, but that’s just not the way music is supposed to be made. There’s going to be people who are going to say, ‘Oh, she’s made a pop album – there’s synthesisers on this!’ I always want to go wherever I’m led, wherever I’m inspired to go. That’s what happened this time.”

Musgraves’ first two major studio albums, 2013’s Same Trailer Different Park and 2015’s Pageant Material have sold 71,973 and 43,472 to date respectively according to Official Charts Company data. While Musgraves said Golden Hour in no way marks a pivot into the pop world – which has traditionally pivoted towards her if anything, with both Katy Perry and Harry Styles asking her out on tour – she is still hoping it can bring more people into her world.

“I’ve been trying to channel this album reaching people way outside of country music, but also including the people that have been there for me,” said Musgraves. “Hopefully, all sides will find some joy in it.”

There’s definitely a massive extra pressure on females in country music to be more accommodating, more friendly to the PDs at radio stations. That same pressure is not applied to men.

Also in the interview, Musgraves addressed the subject of whether or not country music has a sexism problem in light of the high profile incidents such as Tomato Gate (in which radio consultant Keith Hill sparked outrage in an interview by saying, “If you want to make ratings in country radio, take [female artists] out,”) and Rolling Stone’s recent incendiary article Inside Country Radio’s Dark, Secret History of Sexual Harassment and Misconduct.

“Most of the world probably has a sexism problem, but yeah, there’s still definitely one that exists in country music,” Musgraves told Music Week. “Don’t get me wrong, there are good people in country music all over that don’t have that mentality, but there are other people that do act like that. I’ve noticed it first hand for sure, whether it’s being told a certain song won’t work because I’m a female, or a DJ on air asking if he can touch my legs… Whether you’re in country or not, those people exist everywhere.”

“There’s definitely a massive extra pressure on females in country music to be more accommodating, more friendly to the PDs at radio stations,” she continued. “That same pressure is not applied to men. And it can count against you negatively if you don’t live up to those expectations in some areas.”

Our Kacey Musgraves cover feature is just part of our huge Nashville special. Elsewhere in the issue, The Shires talk about taking UK country global with their new album Accidentally On Purpose, the promoters of C2C talk about the exponential growth of the genre in the UK and we give a detailed report on how Nashville become the songwriting capital of the world. There’s also a masterclass in songwriting from country legend Brett James, we also present 5 top country and Americana acts to keep an eye out for in 2018 and “whispering” Bob Harris takes on The Aftershow.