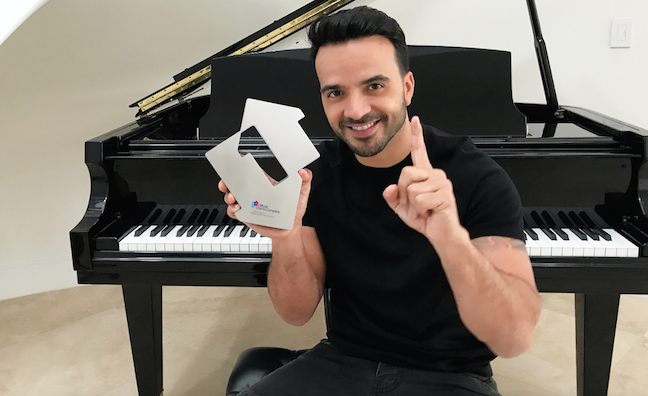 2017 was the year of Latin music’s global breakout – and it was Luis Fonsi who led the way. His song Despacito, performed with Daddy Yankee and featuring Justin Bieber, was released at the start of the year, became an instant hit in Spanish language markets and went on to conquer the world, especially once the remix featuring Bieber dropped.

In the new Christmas double issue of Music Week, we spoke to Fonsi, Universal Music Latin Entertainment boss Jesús López, Sony/ATV Latin America president Jorge Mejía, Polydor president Tom March and others who helped turn Despacito into perhaps the biggest song of the year, and certainly the record that changed the game for Latin music around the world.

What was the inspiration for writing Despacito?

“My inspiration was Puerto Rico. I remember waking up, and the first thing that came to my mind very clearly was the melody and the word Des Pa Ci To. I literally ran to the studio at home and recorded it, and one of the first things I came up with was what is now that last broken-down verse that says: ‘Despacito, vamos a hacerlo en una playa en Puerto Rico, hasta que las olas griten, ‘Ay bendito!’, because it just had that rhyme: Despacito, Puerto Rico, Ay bendito. Despacito means slowly, Puerto Rico is where I’m from, ‘Ay bendito’ is a very local phrase we use over there [expressing sympathy] and it’s very ours. I honestly wanted to write and release an amazing song with a new sound for my Latin audience, that was my goal. At no time was I trying to write a crossover record.”

When you wrote it with Erika Ender, did you think it would go on to be the biggest song of the year?

“I remember it was an easy and fun writing session; everything fell into place. The song felt good from the start. Even though we knew we had a strong melody and lyrics, a fantastic production team, great artists, great vocals and on top of it a beautiful video… I never in a million years would have predicted what has happened!”

Were you surprised by how well the song did in non-Spanish language markets?

“It took us all by surprise, and what a beautiful surprise it has been. Why did it connect? I can't be 100% sure, but I think it has to do with the fact that is a straightforward, happy-vibe type of song. I wanted to make people happy, make them dance, and that same thought that inspired the song, became a reality. People enjoyed the song regardless of whether they understood the lyrics or not, it made them feel good, and for those few minutes, it allowed them just to let go and forget about their problems. And that is a beautiful thing.”

I never in a million years would have predicted what has happened!

What do you think its success will mean for your career?

“I’m grateful that the success of Despacito has allowed me to not only provide some happiness and entertainment during these difficult times, but also to have the opportunity to meet a brand new audience from all over the world, and perform in so many different countries for the first time. That’s pretty unique, especially when I’ve been at this for almost 20 years. It’s a humbling and wonderful experience. I’m currently on tour in Europe, and just released my second single, Échame La Culpa, with the amazing Demi Lovato. The song is doing incredible, and people have welcomed it with open arms. I still have several commitments this year, and after the holidays, I will start promotion again in the US and combine it with my world tour. Lots of work, but I wouldn’t want it any other way…”