Idles' Joe Talbot on the perils of the music industry 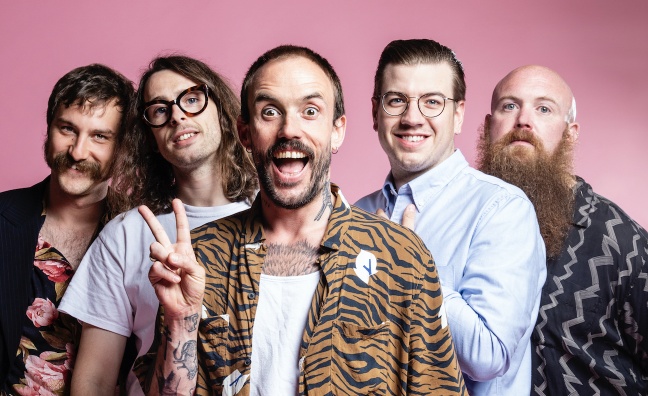 Joe Talbot has told Music Week that Idles would have been “chewed up and spat out” by the music industry if they’d had more attention early on in their career.

Idles star on the cover of the new edition of Music Week to tell their music business story, along with Mark Bent of Mother Artist Management, Partisan Records and Paradigm agent Natasha Bent, plus superfan and BBC Radio 6 Music DJ Steve Lamacq.

Ahead of the release of their third album Ultra Mono on September 25, Talbot outlined the band’s path through the music industry, from complete unknowns to a Mercury Prize and BRIT-nominated rock force, who’ve built a huge fanbase and played gigs everywhere from Alexandra Palace to Glastonbury.

Their last album, Joy As An Act Of Resistance, peaked at No.5 and has sold 69,991 copies to date, according to the Official Charts Company. Ultra Mono could outstrip its predecessor and already has 13,000 pre-orders. Partisan’s international product manager Ellie Rumbold said that Joy… had 11,000 and that “growth is tangible” this time round.

The team ripped up plans for Ultra Mono when coronavirus hit, devising a fans-first campaign that includes more singles than previously planned and a timeline leading into the release that fans can sync with their own calendars.

Look out for more on the campaign on musicweek.com in the run up to Ultra Mono, up first, we hear from Talbot on the band’s evolving relationship with the music industry.

“We were ignored, full stop, I don’t blame them,” said the singer. “If I was an A&R, a plugger or a journalist, there wasn’t much to write about for six years because we were busy learning, not writing authentic songs. Because we were ignored, we were allowed to keep going, if we were written about, we’d have been chewed up and spat out, we weren’t good enough.”

Talbot said Idles saw themselves as “a Trojan horse” in popular culture, explaining that they opted to build success via live shows.

“We knew we weren’t going be written about, we’re savvy, we were 25 when we started the band, 28 by the time we made anything legible,” he said. “So, we’re already older than most bands and not good looking enough to be on a front cover without a really fucking amazing album. We knew we were pissing against the wind.”

“We had a loyal fanbase, a small, very singular one, but a loyal one,” he continued. “That was exciting. Our disadvantage was our strength. Being ignored meant we could build our own narrative at our own pace and not be pushed into any corners or have any pressure about what we should do. We used all our disadvantages to our advantage and, lo and behold, word of mouth built us our own fucking ship.”

Talbot said that the Bristol band has “never been anti-industry, just anti-kudos and fashion”.

“The industry is there as an infrastructure to support bands like us, we use it in the right way,” he said. “Partisan are a business, they’re not just mates of ours who happen to have loads of money in their pockets. And we signed a contract, that’s a business contract. We’re not anti-industry, we just know there are ways it can kill you.”

Being ignored meant we could build our own narrative

Reflecting on his experience at the BRIT Awards last year, where Idles were shortlisted in the New Artist category, Talbot said the ceremony was “not a place” for the band.

“We thought we were going in there as the Trojan horse,” he said. “We’d got in the city walls, but we ended up sitting in the senate with all these cancerous fucking snakes whispering in our ears. You can so easily end up as part of the senate, stabbing each other in the back and doing shit you didn’t want to do. That’s what the BRIT Awards was for me, it’s not a place for us. It was a waste of an evening I could have spent with my family.”

However, Idles and their team emphasised their gratitude for such industry recognition.

“It’s important that we stay part of the conversation, and figure out ways to do that and penetrate people’s hearts and minds in a healthy way,” said Talbot.

“We’re still gonna make mistakes, but we’re allowed to make them. That’s the beauty of where we’re at. I don’t envy bands that unwittingly become popular early on and have to learn the hard way. We just incrementally got more and more popular, we didn’t go from the 10 metre badge to the 200 metre badge.”

Read the full interview in the new issue out Music Week, out now. Subscribers can read it online here.