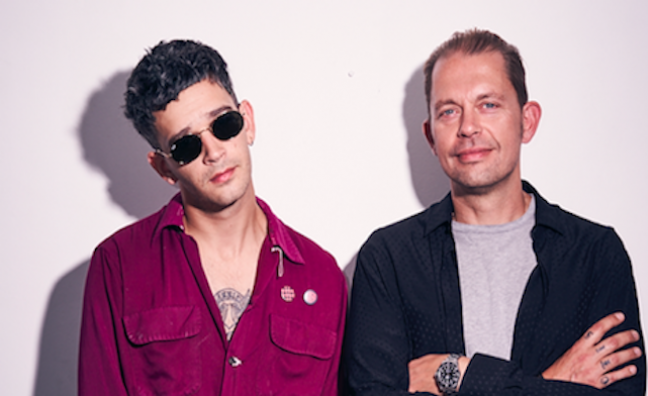 Jamie Oborne and The 1975 have been waiting for this moment for what feels like forever. Tonight, Matthew Healy, Adam Hann, Ross MacDonald and George Daniel will walk on stage at Reading Festival as headliners.

People, the first single to be taken from their upcoming fourth album Notes On A Conditional Form – now slated for a February 21 release date – was premiered on BBC Radio 1 last night. It follows the customary self-titled track that opens their every album, the latest was a powerful statement on the future of our planet featuring teenage environmental campaigner Greta Thunberg.

Speculation about their Reading & Leeds performances this weekend has swirled since their position on the bill was announced. To find out what to expect from this weekend’s shows, not to mention the new record, Music Week caught up with Dirty Hit and All On Red Management boss Jamie Oborne on his way to rehearsals.

The man who travelled up to the North West to watch The 1975 play in a garage after a Myspace tip-off way back when was on philosophical form. “You work towards these things and they happen, it’s just weird times,” he said, enjoying the struggle to articulate his feelings on the gravity of the situation.

How’s the mood ahead of Reading & Leeds?

“I don’t know, man [laughs]. It’s all a bit surreal isn’t it? We’re very excited. There’s a lot of nervous energy. It feels like it’s going to be an important gig. It feels like it’s greater than just an expression for ourselves. I’ve been in Japan with the band and we’ve been in rehearsals this week. It is just another show, but also it’s completely not that. It’s a strange one.”

“Yeah. It feels like a real landmark moment for The 1975, the boys individually, Dirty Hit, myself. Lots of people have been working on this for a really long time and it’s no longer just for the band, it’s for a lot of people. I’m excited to see the crowd before the band start. It’s going to be a good day.”

What can you tell us about the show itself? Can we expect surprises?

“Erm… I couldn’t possibly tell you anything to do with that, I’d have to kill you afterwards! [Laughs]. We’ve just released new music, so it’s going to be fun, I’m really excited and slightly terrified. It’s a big moment. Will they play the new song? I don’t want to ruin any surprises. It’s The 1975, you know? It’s going to be everything that people have come to expect.”

I'm really excited and slightly terrified. It's a big moment

Are people expecting more and more from them as they progress? The Greta Thunberg track went down really well…

“It would have been difficult not to receive it well. It’s such an important message. Sometimes there’s a feeling that everything has an agenda and you’d probably be surprised to hear that three weeks before the song came out, it wasn’t happening. We didn’t know that was going to happen. But once we’d met Greta and her father and the notion started, Matthew was adamant that you can’t sit on a message like that for six months. Originally it was supposed to be received as the first track on the album, as people listened to the album, but he didn’t need to say that to me twice, it was his responsibility to not sit on it. I love that we’re always purposefully guided rather than guided by commercial agendas or what is the expected pathway for a huge artist. I love that the band are becoming bigger and bigger and not compromising themselves or losing sense of the purpose that drives the statement in the first place. That’s what people are learning to come to expect from The 1975, refusal to be compromised or to compromise themselves.”

What was the process between Matthew and Greta like while working on it?

“It was a great meeting of minds, their common ground is that neither will accept compromising their beliefs for other people’s agendas. That’s what made it so powerful. Matthew wanted to meet Greta, he’s become really into the idea of giving people a platform, it helps makes sense of this crazy lifestyle. He identified Greta as the most important person in the world to give a platform to, for obvious reasons.”

Does it set the tone for the album? Will it address similar, universal issues?

“They do that on every record. As one progresses in life, perspective on these issues becomes more focused. If there’s a theme for the new album, the theme is life, experience, the modern world, everyone… Humanity’s struggle with that, as an individual or as a group. It’s not necessarily about the environment, it’s about the future.”

What stage is Notes On A Conditional Form at now?

“It’s all coming together. It’s going to be a long, joyous, painful process, as always. Everyone will need a long pause at the end, which we won’t have time for, it’s the same again, the same as always [laughs] as it should be. Show me a record that doesn’t have that and I wont bother listening to it.”

The new album will be a long, joyous, painful process, as always

Where does this weekend rank in the arc of The 1975 so far? Is it one of the biggest of their career?

“Yeah absolutely. It’s really, unbelievably special and important to us. We’ve all been going to this festival every year since we were 15. I’ve witnessed so many incredibly inspiring musical moments there, whether it’s Nirvana, Oasis, Blur, Jane’s Addiction, Arcade Fire, Arctic Monkeys… So many brilliant, important cultural moments. To be even having this conversation about how this is one of those is deeply humbling. It’s different times, it’s almost like every expectation or reaction or experience almost happens before you do things these days. It’s weird as fuck.”

What’s your role in keeping the band focused?

“Honestly, that side of things is no different to usual, we’re just keeping focused on our expression and not worrying about what others expect. We’re all trying to carry each other, it’s going to be good.”