"It took a lot of courage...": Shania Twain gives the inside story behind her incredible comeback 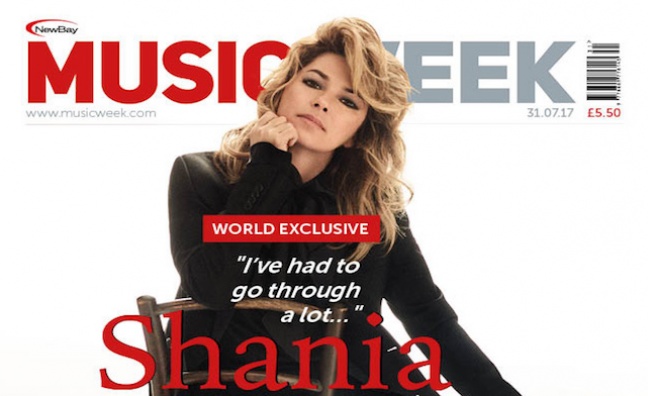 In the new issue of Music Week, we welcome Shania Twain to the cover. The Canadian megastar takes on the Big Interview to talk about her incredible career and brilliant comeback album, Now. The bumper five-page feature also includes contributions from the world class team around her, led by Universal Music Group Nashville president Cindy Mabe, Virgin EMI president Ted Cockle and Maverick Management's Scott Rodger.

In the interview, Twain talks about how, following a bout of Lyme disease 13 years ago, she began suffering from a vocal cord condition called dysphonia – one that almost ended her singing career.

“I was going through years of this dysphonia, not even knowing what dysphonia meant at the time,” Twain told Music Week. “I wasn’t able to project any sound or control the quality of the sound. Even speaking was very, very difficult. I couldn’t yell out for my dog. I was afraid of finding out what was wrong beyond what the typical voice specialists were telling me, which was, Nothing’s wrong with your voice! The cords looked fine to anyone who was a voice specialist. They were saying, Your cords look great! I started to think it was all in my head, so I just thought, I guess I’m never going to sing again. I’m just going to write songs, because I love to do that.”

Twain went on to detail the difficult period of physiotherapy that she had to endure before she could return to the stage and the studio.

“When I first started doing it, I was like, I cannot even do the basic things – this is humiliating!” she recalled. “You have to go through all of that humiliation, and listening to yourself like that. That’s what I was facing. Would my cords actually function the way I needed them to again? Would they ever be strong enough again, or controllable enough, or manageable enough? That was the unknown that I was facing, and it took a lot of courage to tackle it, knowing that I may never sing well again.”

Also discussed is how Twain approached recording Now in the studio without her ex-husband and longterm producer Mutt Lange, eventually opting to oversee production herself with other collaborators.

“I had collaborated for 15 years with Mutt, I never imagined that I wouldn’t be married to him, and I never imagined that I wouldn’t be creating with him,” said Twain. “I was so sure that that was forever, and I believed in it. Within our collaboration, obviously I did a lot of writing on my own – we would write separately and then come together with our ideas – but I had never realised all of my ideas to completion alone, because we would always collaborate at some point along our creativity. So I’m thinking, Well, I already know how to write alone, I don’t need a collaborator to do that; but can I come to the end on my own? That’s the part I need to do alone. I’ve never made a record without Mutt, I’ve never recorded my vocals, I’ve never arranged the backing vocals without Mutt. There were so many things.”

You can watch Shania Twain’s comeback video for Life’s About To Get Good below.