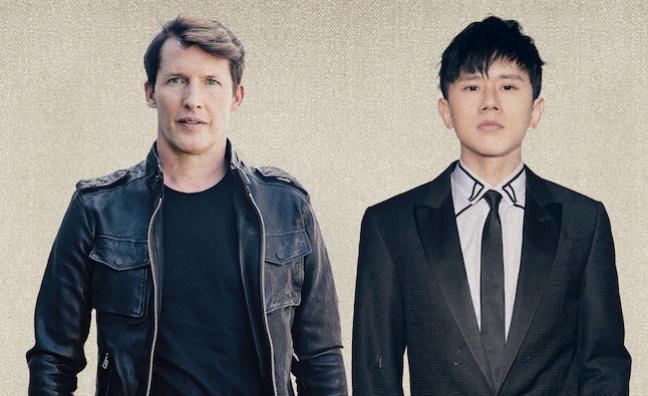 “This special version of Adrenaline is a true partnership between the artists and a musical meeting of minds,” said a statement. “It is a blend of James and Jason’s styles which mixes perfectly as they sing alternating verses on this infectious track.”

James Blunt, who’s signed to Atlantic in the UK, has global sales of over 20 million albums and 20 million singles, while touring to sold-out audiences the world over.

Jason Zhang is one of China’s most recognised recording artists and performers. He has released 15 albums and has held concerts at Beijing’s National Stadium for two years in a row. He has also held 65 concerts internationally in 34 different cities.

Jason Zhang has appeared on reality television shows and has amassed a social media following of more than 90 million Chinese fans.

Jonathan Serbin, co-president of Warner Music Asia, said: “We are delighted to announce this collaboration between James and Jason as it puts together two of the biggest stars from the world’s largest music markets.

“Partnerships between Chinese and international artists are set to be a growing trend as international acts want to tap into the vast audiences here and local performers want to take their place on the global stage. Pairing these two iconic artists together means that we can further grow their global audience and amplify their success.”

Paul Samuels, VP A&R Atlantic Records UK, added: “Jason is an accomplished artist. This track allows him to build his presence across the globe, giving fans who might not have known about him the opportunity to discover his talent. For James, who has already established a strong presence in China, the track provides an exciting offering for his growing fan base in the region. Their voices blend so well on this memorable track; they both really hope the fans will love it.”

The collaborative version of Adrenaline will be released today (March 18) on all major DSPs.