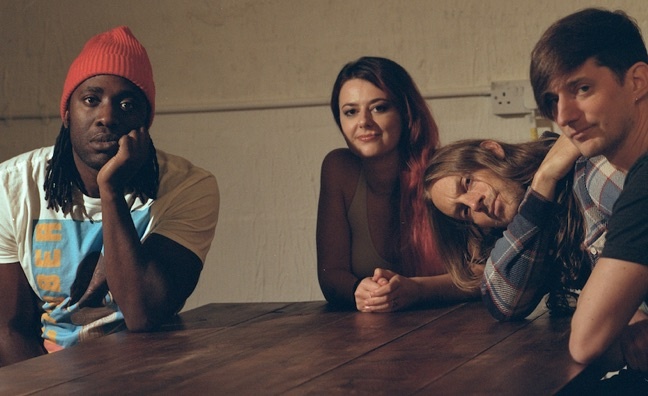 Ahead of the release of Bloc Party’s sixth album, Alpha Games, out on Friday April 29 via Infectious/BMG, singer and guitarist Kele Okereke unravels the latest stage of their evolution...

This line-up of Bloc Party has been in place for a while now, but this is the first album you’ve recorded together. How was the studio process?
“Justin [Harris, bass] joined while we were making [2016’s] Hymns and Louise [Bartle, drums] joined just after, so I knew that she was really champing at the bit to put her stamp on things. She had so many ideas and is such a phenomenal player. I didn’t tell her, but she really took my breath away. This is the sixth Bloc Party record, but it’s the first Louise has ever made. It’s subtle and nuanced, but there’s a swagger to it.”

In 2020, you played shows to mark the band's debut album Silent Alarm turning 15. Did the spirit of that album feed into the new one?
“Yeah, we’d started writing after Hymns, but when we were doing the Silent Alarm shows and jamming the material in soundcheck it all started to take on a life of its own. In my mind, this record is very much connected to the period when we were on the road. I’ll always remember the energy we had from those performances. It felt exciting. There was just an implicit understanding between us that anything we were going to do had to have that feeling too.”

It’s subtle and nuanced, but there’s a swagger to Alpha Games

This is Bloc Party’s sixth album and you’ve done five solo records. Does that make you a music industry veteran?
“Looking back, I just feel extraordinarily blessed. It’s been interesting. For sure there have been ups and downs, but I wouldn’t change a single thing because it’s got me here. I just feel thankful I’ve been given the opportunity. There are plenty of people who are talented who don’t get a break. There are some artists who believe that they’re the centre of the universe and everything they do is faultless. I kind of get that, but I am aware that it’s more than just me and what I do, it’s circumstance as well. I remember being a teenager and plenty of my friends wanted this lifestyle, but Russell [Lissack, guitar] and I made it happen for ourselves, so I’m thankful for that."

Finally, as the Silent Alarm tour helped shape this album, are you looking forward to doing Alpha Games shows in 15 years?
“Yeah... I do like the idea of going back to records, and I didn’t think I would. It was fun. I can already see now with all the music I’ve made that some of the records are connected – not necessarily thematically, but sonically. I think it could be cool to explore that, but it’s just a pipedream. We’ll just keep making music together and see...”