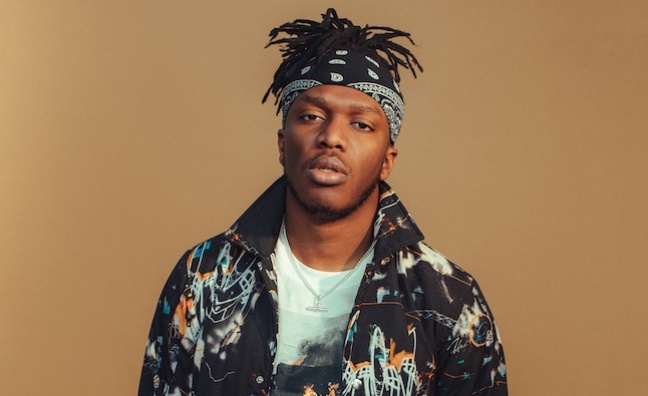 KSI is back with a bang.

If the former YouTuber had not yet persuaded the music industry of his long-term potential, there can be few doubters left following the week one performance of his second album, All Over The Place (BMG).

The album is chasing a No.1 finish and could top the first week total of Dissimulation, which racked up 27,472 sales 14 months ago when it narrowly missed out on No.1 to The 1975. Dissimulation is also set to go gold any minute now (it was on 98,554 Official Charts Company sales in the last full chart week).

KSI (real name Olajide "JJ" Olatunji) would have had 12 tracks in the Top 100 singles Midweek Sales but for OCC rules that limit a primary artist to three entries. Current single Holiday (which peaked at No.3) is chasing a Top 10 finish with sales up almost 30% week-on-week, while album highlight No Time featuring Lil Durk is pushing for the Top 20. Gang Gang feat. Jay1 and Deno is next in line with a Top 40 position in its sights.

Don’t Play, the collaboration as a featured artist with Anne-Marie and Digital Farm Animals, is also set for the Top 40.

The All Over The Place album was launched with The KSI Show, a global online event featuring star guests including Yungblud, AJ Tracey and Anne-Marie.

What are your long-term hopes for All Over The Place as a body of work?

“I'd like it to go gold and platinum if possible. There's been a lot of work that's been put into it. We've had the privilege of having JJ’s self-discovery in music on display for his fans to see. Some of the sonics are all over the place but it still has a consistent flow to it. We’re in this eclectic age which started with the iPod generation and now the playlist generation. On her playlist my daughter shares with me, she'll have Pop Smoke, Led Zeppelin, Yungblud and then Portishead. So it's really cool that we can embody that in this album to some degree. It's been really fun not to be limited to just doing one sound. But going forward, I think we've got some ideas on how to narrow the scope a little bit and start making it more identifiable as KSI…”

Which tracks are driving the streaming consumption?

“The people have spoken in terms of No Time with Lil Durk being quite the standout track. They really like that. If you played Holiday and No Time back to back, most people who don't know it's KSI would think it's two different artists. But I've already started conceptualising and thinking about how we can narrow this down and make it an identifiable sound for the next album and maybe the next one or two projects. KSI’s had immense growth as an artist, he's really versatile and that's something people have noticed in many of the reviews. But I think it's my job on the creative side to hone in on what he has a good time doing. I've got to honour what he wants to do and what he has fun doing, and cultivate that sound as an exec producer. But I’m really proud of All Over The Place, it's been a really fun project because of the lack of limitations.”

You mentioned the Lil Durk track and there are also appearances from 21 Savage and Polo G. With those heavyweight American rappers, how is the US reacting to KSI this time around?

“KSI is now very much being looked at as a global artist. He's being recognised as an artist, people are not laughing at the idea of the YouTuber who's turned into an artist. They recognise him as this force [in music]. We haven't put any focus or marketing dollars behind him in the US.  We do have big goals in the US but we haven't attacked that yet. When we do, I think that he will be the first UK rapper to break the US on a big scale, because no one's done that yet. From day one when I had my first conversation with him, I said, ‘This is what I want for you and this is what you'll be able to do’. What I love is that we've consolidated our goals together and we want the same things. He has his own objectives and [KSI’s team] all share those objectives. As a manager, I might guide some of those objectives but luckily we're all very aligned.”

There are healthy sales on CD, vinyl and cassette, were you confident about the physical roll-out?

“Yeah, he's got a fanbase that wants to hold a KSI CD - they’re  excited for the opportunity to purchase a signed album and own a piece of history. The relationship he's got with his fans is incredible, it's a very honest relationship. When they like a product that he's involved in they don't hesitate in showing their support - but they will definitely let him know when they're not into something. We knew that there would be a good portion of his fanbase excited about owning the physical [release].”

How have the streaming platforms supported this album?

“We continue to build his brand as an artist, and as we do that our relationships are getting stronger. The perception of KSI as an artist is catching up with what the reality is. It's undeniable that he's shown exponential growth as an artist and he's going to continue doing so - he's nowhere near his roof.”

How important is the financial investment in building his career, such as The KSI Show?

“For that particular show, I did a deal with a sponsor - they funded it and then he wanted to put extra into it himself. We're the same, we want things to be next level as much as possible. We want things to be meticulous and perfect, and we hate it when we have to compromise our art because of finances. The cool thing is that we're very much aligned in our principles. It's not about making money. That always comes when you do things for the right reasons, because you're passionate about them and you love them. Under my management, we've turned down about $40 million in offers in a short space of time. It’s because we're not going for the low hanging fruit, we want to apply integrity in the things we do. We want to make sure his brand is protected and make sure he's having a good time. I would never want him to do something for $10 million, even if it's 36 hours of work, if he's not going to enjoy it and it's going to affect his mental state. Our decision-making isn't influenced by money.”

Was that money you turned down from brand deals?

“Some deals I can't really speak about, but there are all kinds of things from podcasts to TV shows to big brand deals and things like that. But we just didn't feel like we would align well with those opportunities. With new platforms and start-ups there are all kinds of opportunities that get thrown my way all the time for JJ. I've had clients who say yes to everything, ‘Let's make as much money as we can while we’re famous’. But that's the opposite of JJ, he's just like, ‘Let's do things that we have a good time with’. So that's pretty much our philosophy, collectively.”

You probably couldn’t have written the script better yourself so far, but where can KSI go from here?

“I could have written it better if I could rewrite Olivia Rodrigo’s release dates, then we'd have had two No.1s by now on the singles chart. We still have a lot of goals internationally, in the US and even in the UK. Even though we've changed the narrative and a lot of people's minds on their perceptions, there are still naysayers and people who don't take him as seriously as they should. We're going to continue to turn them one by one.”

Subscribers can click here to read our KSI interview.