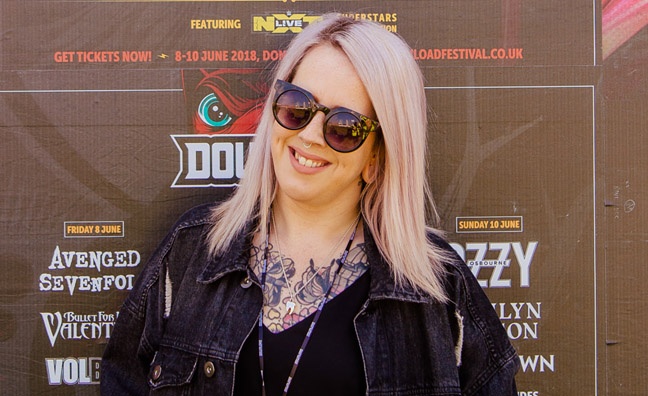 Steph Van Spronsen – who has previously appeared in Music Week talking about her work as a promoter for Live Nation UK and talent booker for Download Festival – has announced details of a new development consultancy to help nurture underground artists.

The consultancy will sit under her Baroness brand – which was founded in the early years of her career spent at Visible Noise – and offer support on a variety of common enquiries including creative, digital, marketing, PR, touring, festivals, distribution, merchandise and more.

Van Spronsen has already teamed up with Denmark's Prime Collective. An official press release stated that she has “a number of UK development acts already in the pipeline”.

A graduate of the London College of Music with a MA in music management & artist development, Van Spronsen began her career at Visible Noise records working with acts such as Bring Me The Horizon and Bullet For My Valentine, followed by a stint a Radio/TV Plugger at The Noise Cartel. As part of the PR team she oversaw festivals including Sonisphere, Bloodstock & Hellfest and worked with artists including Alice Cooper, Asking Alexandria, Frank Carter & The Rattlesnakes and Papa Roach. She also has experience as an independent tour manager.

Speaking about the launch, Steph Van Spronsen said: “During my career I've seen so many bands make so many bad decisions because they didn't have the guidance of an industry professional. I've always tried to help and mentor artists that I was passionate about alongside my current role, but now I can dedicate more time to consulting with developing artists and offering that guidance to help them take the next steps and presenting them to potential other key players in the industry when the time is right. I want to prepare these bands to be 'industry ready' and help develop all aspects of their career so I can present them to agents, managers and labels to take the next steps with them.”