Luke Evans on his Christmas album, duetting with Nicole Kidman & life in the music industry 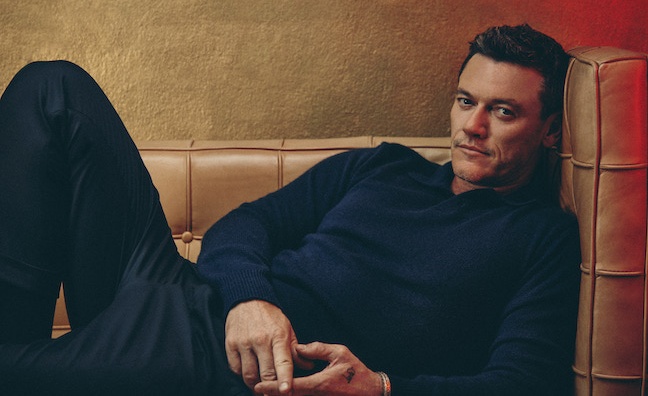 Earlier this month, Welsh actor Luke Evans released his second album A Song For You via BMG. If not a record filled with outright festive cheer (although there are stirring, atmospheric takes on Silent Night and Last Christmas), it’s a collection of songs designed to be listened to on cold winter nights from the comfort of warm, cosy homes, preferably with a fire raging in the background.

Evans has become one of the breakthrough stars of the screen over the past decade, with high-visibility roles in The Hobbit trilogy, Beauty And The Beast, Fast & Furious and more. A Song For You, though, sees him return to his early days in musical theatre. Here, he tells Music Week about why he felt compelled to make another record, how he roped in Nicole Kidman and Charlotte Church for duets, his thoughts on the music industry and more...

Take us back to the beginning of this album. Where did it start?
"It started last year. Originally, I had to say no to recording an album and releasing it because my schedule was too crazy, but that changed and I realised I had time so I thought, ‘OK, let’s do this’. Because we’d already started the ball rolling and then put it on pause, we were already quite far down the road. We already had the song lists and the ideas and the concept. Then we started to think about the kind of songs I wanted to sing and what people liked from the first album and the songs I love to sing. I’d already written music as well during lockdown, which I wanted to hopefully get onto the album and ended up on it, some duets. It was all a very organic process."

Was there a song that led the way?
"A Song For Me, which is the first track on the album, was the driving force to all the other songs. I love the sentiment and the lyric, it feels a bit like my life. I listen to the beginning of the song and think, ‘Wow, yeah, I feel this person, I know what this person is saying’. That’s also why I love Donny Hathaway. I was introduced to him through Roberta Flack and I’ve been a fan of their music ever since."|

What did you learn coming out of your first record, 2019’s At Last, that you took into this one?
"Well, it was a whirlwind, firstly. As an actor, when you do press for a movie, it’s a press junket, it lasts for four or five days and then the film comes out and that’s it. And also, you’re talking about it with several other actors, and a director and producers and it’s sort of a collective opinion on the show. But when you do music – and I’m not in a band – it’s just my voice, my music, my choices, I realised there was a lot to say and a lot to own. I felt like I wanted to have ownership of my second album. This time I wanted to do duets, I wanted to have my own music on the album. And it’s coming out at Christmas, I want it to be a winter-y kind of music, songs you can play while you’re wrapping Christmas presents, drinking too much mulled wine and having your 15th mince pie, music that people can just enjoy listening to, songs people know but my versions of them."

You can play this album while you’re wrapping Christmas presents, drinking too much mulled wine and having your 15th mince pie

How did the duets with Nicole Kidman and Charlotte Church come about?
"I’ve always wanted to sing with Charlotte, I’ve known her for 25 years. We’ve never recorded together, we’ve never sung publicly together, but she’s a friend of mine. I always loved the song Come What May but I wanted to make it a much bigger version than the one in Moulin Rouge. I thought, ‘She’s perfect, if she lets me pull out that incredible voice of hers’, which she doesn’t like using so much anymore, she’s moved away from the opera and the big belter. I convinced her that she should do it and she did. With Nicole, that was just a major moment of, ‘If I don’t ask, I’ll never know – but I’m expecting her to say no because she’s so busy’. I reached out to her. We became friends because of Nine Perfect Strangers, the show we recorded in Australia two years ago. I sent her a voice message and I just said, ‘Listen, this is a long shot and if you say no, it’s totally fine but I’m going to ask anyway’. And she said yes! You’ve got to try these things, you never know."

Why do you think she said yes?
"Well, she likes me. I know she likes me, she’s got a soft spot for me as I do for her. She’s a lovely human being. She’s very kind. She’s very warm. She’s very inclusive. I knew she liked to sing and she comes from a household of music, as you can imagine with [Kidman’s husband] Keith Urban. We sang at their house just before Christmas, and I thought, ‘Maybe this would be something she’d like to do.’ I love her voice and I think she really enjoyed the process."

Was there one standout moment making the record?
"Probably singing A Song For You at 9am live in the room with the orchestra. My mum and dad had been there for a day to watch and they had to leave and I said goodbye to them and I was feeling so happy that they got to experience it. I went in and we decided that I would sing in the room with the orchestra because the song starts a cappella and we really needed to feed off each other’s emotion. It was one take, it was very special."

There’s two original songs on the record that you’ve co-written with Ed Sheeran and Kylie collaborator Amy Wadge. How did you approach writing songs for the first time?
"Busy Breaking Yours was the first song I wrote with Amy. That happened in the third week of lockdown, when the whole world went into lockdown. I was in the States and she was in Wales and we used to Zoom, I’d bought some recording equipment on Amazon and we recorded that then. It's extraordinary really to think that that song came from then and has now been immortalised on my album. Horizons Blue was a very different kind of song because Busy Breaking Yours is quite a regretful, sad song about love and break-up and then Horizons Blue was about the optimistic, beautiful energy of falling in love with someone, like it’s a bigger power than you. It felt very real to me at the time. Before that, I’d never written a song in my life. I’d written and recorded little melodies on my iPhone but I’d never done anything with it. It was only because I was brave enough to reach out to Amy Wadge and ask her if she would write with me. Amy said, ‘Write absolutely everything down, it doesn’t matter how silly it sounds out of context, it doesn’t matter because some of the best songs ever written came from the tiniest of ideas’. And when she told me that, the floodgates opened for me. I stopped feeling silly about writing stuff down."

Finally, moving from the acting world into the music industry, what’s been the most surprising thing about it to you?
"It’s completely different, they’re completely two different animals. Nothing is the same, the whole process is different. That was really exciting for me but also like, ‘Wow, okay, so this is how it works here’. Also, it being a solo album, I was incredibly involved from the outset, every decision was made by me. I worked very closely with the producers, the A&R, the label, the musicians, the choices, every part of it was done via me and that felt very nice, it felt like a real ownership of something. Because when you make a movie, there’s a lot of cogs in that machine. You can’t make a movie on your own, you need a cameraman, lighting, sound, makeup, hair, costume, director, set design, production design, soundtracks, money, finance, distribution, studio. With the album, it was label, performer, musician, producers and from that comes everything else. It was a really big learning curve, for sure."