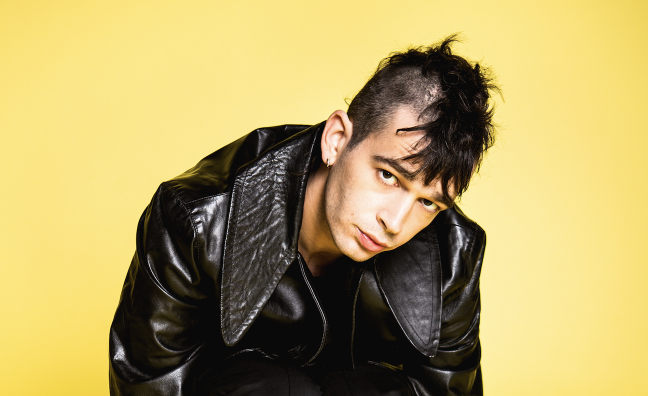 Matthew Healy has told Music Week he “left no stone unturned” when writing the lyrics for The 1975’s fourth album.

Notes On A Conditional Form (NOACF) is released via Dirty Hit on May 22, and Healy stars on the cover of our new issue in celebration of its arrival. We’ll be posting more from Healy and The 1975’s manager and label boss Jamie Oborne all this week.

“It’s always important to me to try and leave no stone unturned in how I try and delineate who I am, to make sure I haven’t left out any of the shitty bits,” said Healy. “Sometimes, if you find comfort in expressing yourself in a long-form way then it can be a challenge to express yourself in a short-form way. But I think I’m quite good at both now.”

Healy, who noted that humour colours much of NOACF compared the process to “stand-up comedy” and said, “the best comedians are the ones who express their biggest ideas in the fewest words, that’s something I strive to do.”

The best comedians express their biggest ideas in the fewest words, that’s something I strive to do

He added: “If the album isn’t funny, it’s deeply earnest or about my deepest fears and anxieties. Playing On My Mind and Roadkill are probably my funniest songs.”

Healy also noted that, in some instances on the record, he deliberately allowed himself less space for lyrics. “It’s way easier for me to write a song like The Birthday Party where I’m going, ‘Skip, do be doo, fucking this and that and that idea’, I can just keep going with those, I’ve got loads of syllables to express myself,” he said. “With songs like Yeah I Know, the room I’ve got is four syllables.”

Guys closes the 22-track record and Healy said it was conceived as a love letter to his bandmates Adam Hann, Ross MacDonald and George Daniel.

“Guys signposts a change and looking back. I wanted to write a love song that wasn’t romantic,” he said. “There aren’t many songs about some of the most formative, important relationships in your life, which are your friends you know? It’s a love letter to friendship.”

The singer said Guys marks a rare collective moment of retrospection for The 1975.

“It’s the seal on the end of the record, I love it,” he said. “I go back into my past and talk about stuff all the time on records, but as a collective or with the acknowledgement of us as a group, we’ve never really looked back. Which is why I’ve never been able to finish the documentary. Retrospective statements always feel stupid. It always feels like, ‘move forward!’”

The 1975 released the seventh intro track from NOACF last week, and If You’re Too Shy (Let Me Know) is currently in the Top 10, thanks to 13,310 sales so far this week.

“It’s like a really crystally moment of pop, it’s like Go West or some shit, which I fucking love,” said Healy of the single, which fans had been clamouring for since The 1975 aired it on tour earlier this year.

“I didn’t think to put it out before the record, but now that’s just what happened and I was being outvoted, not only by the band and everyone, but by the fans!” he said.

Healy described the track, which has 2,862,865 Spotify streams so far, as “a pop song about getting naked on the internet”.

“All these songs are meditations on FaceTime, distance, loneliness, the desire for intimacy,” Healy said. “It’s what that song’s about, but it’s got a fucking ripping sax solo, so who can complain?”

The 1975 released Jesus Christ 2005 God Bless America earlier this month. It’s one of four songs on the record to feature Phoebe Bridgers, who Healy described as “the Stills and Nash of this album”. It has 4,688,082 Spotify streams to date.

“I’ve left it quite open, that song,” Healy said. “Really, it’s the ultimate NOACF song, it’s a series of notes. At one point I wanted it to be about [one subject], at one point it was about the prison industrial complex, at another it was about the oppression of religion on young people regardless of sexuality. It’s been about loads of different things. I just took my favourite lines and made the song.”

“It hints towards things, that’s what’s interesting about it,” he continued. “It’s not like Love It If We Made It, which is, ‘Oi, this is what I’m talking about’, it’s a bit more interpretive. It’s about America, and the things I drive past there, I love America and spend so much time looking out on its coolness and its beauty, but there’s also bits that make me shiver a little bit. It’s about those things.”

Subscribers can read The 1975 cover story in full here. The new edition of Music Week is out now.