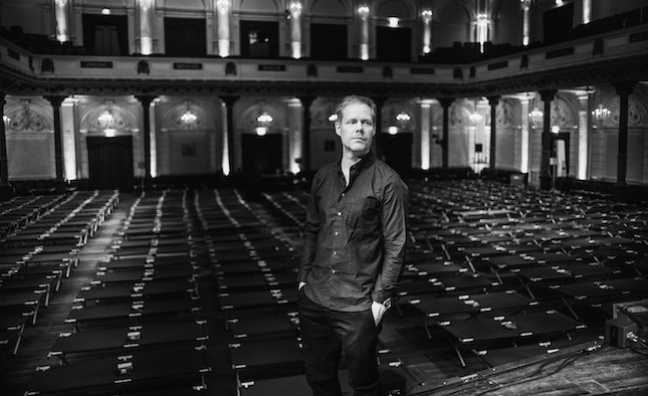 Max Richter has spoken to Music Week about his huge success as a streaming artist.

The neo-classical artist and film composer has amassed 3,149,844 monthly listeners on Spotify.

“Records I released 15 years ago are getting more of an audience now than they ever have, which is wonderful,” said Richter.

The instrumental 2015 album Sleep (Deutsche Grammophon/Decca peaked at No.44 and has sales of 40,151 (15,905 from streams), according to the Official Charts Company.

As well as being his most successful work on DSPs, the eight-hour opus has been recreated as an ambitious overnight live show at various venues around the world.

Richter launches his new show Voices (February 17 and 18) at the Barbican, the London venue where he first performed Sleep. (Deutsche Grammophon/Decca). He has described the ambitious composition as a “personal lullaby for a frenetic world”.

Max Richter’s Sleep, a new documentary, is touring film festivals and had its North American premiere at Sundance last month.

“I was over at Sundance and it played very nicely with the audience, there was a very warm response to the film,” said Richter.

During an outdoor show in LA where fans camp out for the eight-hour performance, the filmmakers go behind the scenes with the composer, who even gets to go walkabout during his own gig.

“The shows are wonderful, because they are an opportunity to discover what the piece means to the audience,” said Richter. “It's really not a traditional performance – the audience are in bed. Because the piece is over eight hours long, there are moments when I get off stage, drink a cup of coffee and I’m just able to experience it.”

Rather than cashing in on success, though, the Sleep touring project is a labour of love.

“The logistics and the financials just don't make any sense at all,” Richter told Music Week. “We've had hundreds of inquiries to do Sleep shows, and we've managed to pull off about 20-25. It's just impossible, really, but every time we get one over the line it's an amazing feeling.

“I'm lucky enough to be in a position where things I was doing getting on for 20 years ago are still listened to. Because there's quite a big catalogue of work there, you have a sense of people finding their way through it. So it means that there are a lot of constant listeners, and that does generate revenue to put into new projects.”

Eagle Rock Films presents the documentary from JA Films and Globe Productions. It was produced by Julie Jakobek, Yulia Mahr, Oualid Mouaness and Stefan Demetriou, and directed by Natalie Johns.

Eagle Rock Films’ Peter Worsley and Geoff Kempin said: “The Sundance audience are the epicentre of the wave of global awareness of how special Max Richter’s Sleep is.”

Stefan Demetriou, MD Globe Productions, added: “Max Richter’s Sleep represents Globe Productions‘ continuing commitment to documentary film and bringing our artists’ stories to visual life. We are proud to have worked with Max and Yulia Mahr - alongside Julie Jakobek at JA Films - on this innovative and creative piece. Sundance selection is a great honour.”

* To read the full interview and Music Week report on the rise of neo-classical music, click here. To subscribe to Music Week and never miss a vital music biz story, click here.