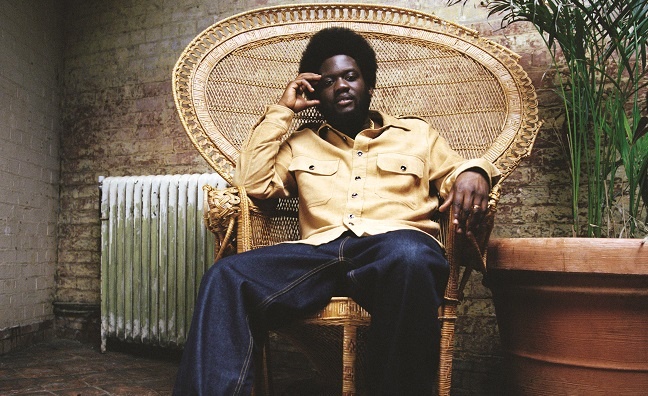 Michael Kiwanuka has told Music Week how the reaction to his current album has fired up his creativity.

Updated: Due acute laryngitis the singer-songwriter has pulled dates including O2 Academy Brixton (March 5) and a March 6 show at the Roundhouse as part of the 6 Music Festival.

Kiwanuka scored a pair of BRITs nominations, including a nod in the Album Of The Year category for his third long-player, Kiwanuka (Polydor).

The album peaked at No.2 and has sales to date of 59,271, according to the Official Charts Company. Michael Kiwanuka currently has 3,604,649 monthly listeners on Spotify.

The new record was widely acclaimed upon its release last November.

“I'm super proud and overwhelmed by the response and how it's been received,” said Kiwanuka. “People are still discovering it. It’s quite overwhelming because it feels like the music is getting to more people. I’m at a new stage career-wise in terms of the amount of people coming to shows.”

Kiwanuka said the reaction to his self-titled album has fired up his creativity for new songs.

“The music is changing,” he said. “I’m excited for more music. Just to get people hearing and understanding your music, it means you can make more music and try and really be more creative.”

The rave reviews for the album mirror the critical adulation for 2016 LP Love & Hate, which peaked at No.1 and has become a favourite among industry execs. The Mercury-nominated album has sales to date of 130,285.

The singer-songwriter said Polydor trusted him to record the follow-up without interference.

“There’s a lot of trust,” he said. “I always like to wait until you can hear the basics of an album rather than just playing a song or two, to kind of give them an idea of what I'm trying to do as a whole album. But I'm not great at knowing what singles [to release], so I leave that to Polydor.”

Kiwanuka, who was reunited with producers Danger Mouse and Inflo, admitted that it was a challenge coming back off a No.1 album.

“There's always a bit of pressure that you can put on yourself,” he told Music Week. “But I had pretty much the same team, creatively, working on this last album as Love & Hate. So I knew it was a good team and people I could trust – that definitely helped.”