MUSEXPO Europe: A spotlight on this year's showcasing artists 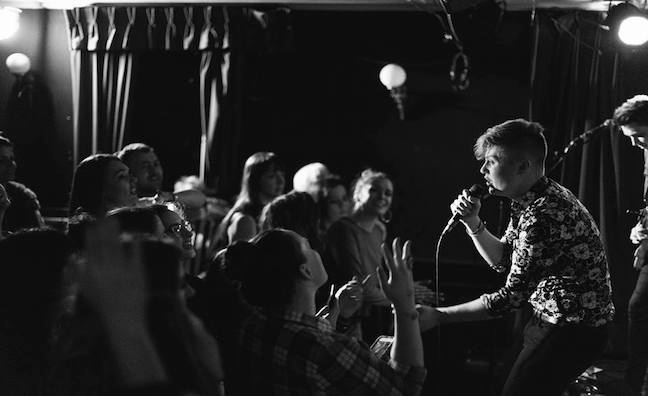 With MUSEXPO Europe 2016 now just under one month away, we’ve provided a close-up look at each of this year’s showcasing artists.

On Monday, September 19, MUSEXPO Europe takes over London’s iconic 100 Club to showcase some of the most exciting new bands and artists from across the globe. Performing this year are North America’s Madyx, Australia’s Starlight Theatre, Ireland’s State Lights (pictured), London-based Tara Lee, Switzerland’s Veronica Fusaro and Sweden’s WOE, who will be performing their showcase at the VIP gala dinner on the evening of Tuesday, September 20. You can find full profile’s on each of this year’s performers below.

Over the years and across three continents, MUSEXPO has provided the launchpad for several international stars via its showcase opportunities. Among those to have taken the MUSEXPO stage before achieving pop stardom are Katy Perry, LMFAO, Jessie J, Frank Turner, Robyn, The Chevin, The Temper Trap, Sheppard, Gavin James and many others.

You can find full profiles and stage times for each of this year’s performers below.

Tara Lee is a rising singer/songwriter/producer and actress from Dublin. Citing influences ranging from Blondie and Massive Attack to Tori Amos and Diane Warren, her debut EP Soundtrack (Irish only release) reached No.4 on the Irish iTunes Albums chart. In 2014 she travelled to Los Angeles where she was the special guest performer at the International Music Industry Awards/presentation to Diane Warren. She recently signed a worldwide publishing deal with BMG Chrysalis.

Lee is currently writing and recording with producer Jonas Quant and is due to release her new EP over the coming months. Lee is also an accomplished songwriter and has written with Blair MacKichan (Paloma Faith/SIA/Lily Allen), Justin Broad (Raleigh Ritchie/Jessie J/Izzy Bizu) and Jonas Quant (No Doubt/Hurts/Kylie).

She was recently asked to compose the theme tune for the International TV series Jack Taylor and also featured in the new series of The Fall, the hit BBC drama where she starred alongside Gillian Anderson and Jamie Dornan. She is currently promoting two films that she has performed leading roles in - Moon Dogs and A Date for Mad Mary.

Madyx is the brainchild of 24-year-old singer/songwriter and guitarist Michelle Blanchard. She relocated from Las Vegas to Los Angeles at age 16, initially seeking success through the rock band Life Down Here. The group’s debut album The Beginning was produced by Jay Baumgardner (Evanescence, Drowning Pool, Papa Roach) and won the group many fans, but Blanchard was keen to pursue new musical avenues. Described as a mix of P!nk and Katy Perry, with influences ranging from Brody Dalle of The Distillers to Melissa Etheridge, she has recorded with Grammy-nominated producer Brian Howes (Daughtry, Simple Plan) in Los Angeles and the result was 2015’s Some Kisses EP.

Madyx more recently released the single Where The Wild Things Are, which was written by Madyx along with the award winning, multi-Platinum selling Swedish songwriter and producer, Carl Ryden (Bruno Mars, Kylie Minogue, Benny Benassi), who also produced the track.

Singer Shobsy, guitarist Joe Regan drummer Paul Ridgeway and bassist Noel Perry all met at BIMM Music College in Dublin. Bonding over an interest in classic ‘80s music and a desire to write stadium-sized songs, they decided to work on a music project. This early incarnation lead to the formation of State Lights in 2014. Progress was immediate and the band quickly decamped to Granard Co Longford to record their first songs in Regan’s home studio.  The first result of these sessions was the Breakout EP. The band received their first UK radio play in March 2015 when they were selected to appear as Shock of the New on the Jo Good show on XFM, while their first US play arrived shortly after through KROQ 106.7.

In March 2016, State Lights released second EP The Disguise, which entered at No 2 on the Irish ITunes Album charts. The following week the band performed to a sold out Whelan’s show. The gig had sold out some six weeks in advance. They also performed on the Ray Darcy TV show. The band will appear at the Independence Festival again this year, where they will perform on the Big Top Stage on July 29th. They will also headline the Workman’s Club on Saturday September 24th.

Veronica Fusaro taught herself everything she needed to produce her first EP Lost In Thought in her parent’s basement. She is currently working on her next EP and is touring around Switzerland with her band. After winning in two categories at the M4Music Festival 2016 in Zurich (Pop and Demo of the Year) and the honour to be the Song of the Day at the Radio Station SRF 3, big news is expected to follow soon.

Born in Brisbane in 2011 but based between London, LA and Brisbane, Starlight Theatre recently signed a global publishing deal with Imagem, as well as picking up both Ed Sheeran’s agent, Jon Ollier at CAA for UK/Europe/Australasia, and Daft Punks’s agent, Jon Pleeter at ICM for the US and Canada. Their influences include U2, Red Hot Chili Peppers, The Beatles and Justin Timberlake. In 12 month, they had played almost 200 shows, supported Evermore in 1,000-capacity venues up the east coast of Australia and released an EP made with ARIA Award winning producer Magoo that rewarded them with radio play and a flirtation with the iTunes Top 10.

WOE is an artist based in Sweden. Born in Zimbabwe, he moved to live with his father in Stockholm and started rapping when he was just 13-years old. He joined the Tensta Gospel Choir, which has produced some of Sweden’s brightest stars, namely Lykke Li, Sabina Ddumba, Elias, Mapei and Zhala. His music is a form of deep soul with blues.