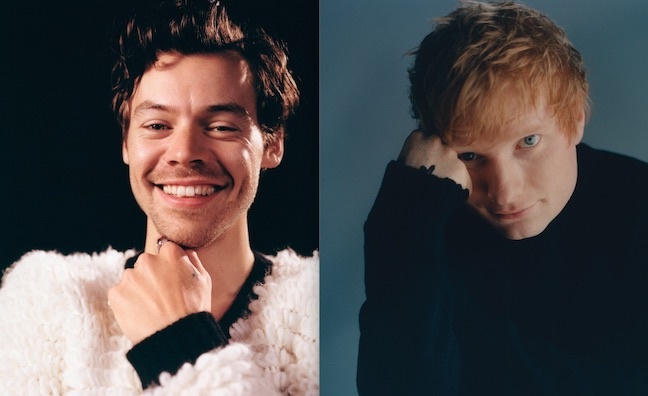 The sales results are in for the half-year of 2022, which is shaping up to be a close contest between Ed Sheeran and Harry Styles.

Read on for the Music Week analysis of the first six months and Q2, based on exclusive Official Charts Company data…

While Sheeran reigns supreme on the albums rundown for 2022 so far, Harry Styles was the star performer of Q2.

Released in May, Styles’ third album Harry’s House (Columbia) was the biggest seller of the second quarter on 244,349 sales. The LP broke 21st century first week vinyl sales with just over 36,000 copies moved in the opening frame.

For the first-half of the year, the sales for Harry’s House are enough to secure second place behind Ed Sheeran. But with a gap of just 12,000 units, Styles could pull ahead of his chart rival in the weeks ahead if the album maintains its current momentum. In terms of catalogue, Fine Line is No.14 for the year to date with 89,398 sales (from a total of 631,003), while the self-titled debut is No.63 with 44,599 sales (total: 428,138).

Olivia Rodrigo performed at Glastonbury last month, and her debut album still remains a favourite in the UK.

Olivia Rodrigo was Music Week’s Artist Of The Year for 2021. Sour was the front runner for much of last year until the release of big Q4 albums from Adele, Ed Sheeran and ABBA.

The scale of catalogue streaming meant that half of the Q1 Top 10 albums were not current releases (or they were greatest hits collections).

For the year to date, however, half of the Top 10 can be classified as catalogue with Little Mix and Fleetwood Mac joined by Ed Sheeran’s ÷, The Weeknd’s The Highlights (Island/Republic/XO) and Eminem’s Curtain Call - The Hits (Polydor/Interscope).

Wet Leg are the biggest UK breakthrough act of 2022 so far with their self-titled debut - although there was only three sales in it.

The Domino-signed duo stand at No.39 with sales of 55,566, following a strong week one vinyl performance. Released in April, the LP was No.9 overall in Q2.

ArrDee’s debut mixtape Pier Pressure (Island) is just  behind Wet Leg in the year-to-date sales rankings. It finished the half-year at No.40 with 55,563. That tiny gap means that it will be an interesting tussle for this year’s biggest breakthrough between the Isle Of Wight indie act and the teenage rapper from Brighton. ArrDee made No.40 in the singles rankings for the first half of the year with Flowers (Say My Name) on 542,547 sales.

Yard Act made an impact in Q1 with their debut, The Overload.

In terms of a singles breakthrough, Cat Burns is this year’s significant developing UK artist. The singer-songwriter from Streatham is at No.7 so far in 2022 with Go (RCA/Since ‘93) on 672,396.