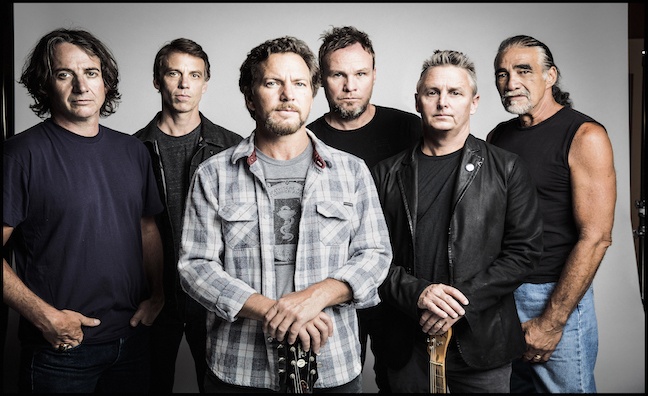 Pearl Jam have unveiled details of their long-awaited eleventh studio album. Christened Gigaton, the record was produced by Josh Evans and the group and will be released via Monkeywrench Records/Republic Records on March 27, 2020 in the US. Internationally, the album will be released and distributed by Universal Music Group.

Gigaton is available for pre-order now via the band's website. An official press release stated that the album’s first single Dance Of The Clairvoyants “will be released in the coming weeks”.

Speaking about the record, guitarist Mike McCready said: “Making this record was a long journey. It was emotionally dark and confusing at times, but also an exciting and experimental road map to musical redemption. Collaborating with my bandmates on Gigaton ultimately gave me greater love, awareness and knowledge of the need for human connection in these times."

In 2018, Pearl Jam released a new track Can’t Deny Me. The song – which was first released as a surprise early download to members of the band’s Ten Club via Monkeywrench Records/Republic Records – was confirmed as being taken from their next album.

The searing track was recorded in Seattle in February of 2018 and was co-produced by the band and Brendan O’Brien (Bruce Springsteen, AC/DC, Rage Against The Machine, Neil Young).

In a clever augmented reality rollout, the group began teasing the album by first releasing a special Instagram filter (titled Gigaton) and revealing co-ordinates to billboards depicting the album artwork in select cities around the world. When the filter is applied to the billboard images, it animates the image while also playing a short snippet of music.

In support of Gigaton, Pearl Jam will also embark on their first leg of North American tour dates in March and April. The 16-date tour kicks-off on March 18 in Toronto and wraps with a two-date stint in Oakland April 18-19.

Pearl Jam's North American tour is in addition to the band's previously announced European summer tour, which kicks off in Frankfurt, Germany on June 23 and includes a headline set at BST Hyde Park.

You can see the dates of the tour below: