Postcard From Pilton #2: Politics, passion and the Pyramid Stage 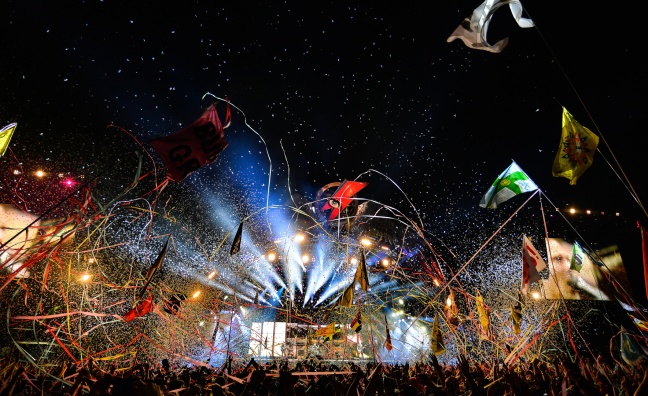 Just before four in the afternoon on Saturday at Glastonbury. Stubborn grey clouds loom, leaving a mist in the air. Underneath them, it’s gridlock by the Pyramid Stage. People are pressed against one another, jostling for position to get the best view possible. Hundreds, thousands more stream towards the stage, seemingly from every direction. It’s polite pandemonium. But not for long. As the clock strikes four and an 81-year-old man in battered denim shorts and a black polo shirt shuffles onto the stage, things suddenly settle.

Michael Eavis is heralded like a hero. Who knew the simple act of grinning and waving could incite such passion. One man sees fit to repeatedly shout, “Go on Michael!” for the entire time the Glastonbury boss is on stage. And why not? He made this whole thing possible in the first place.

Today though, Eavis’ position as Mr Glastonbury is under threat. His rival? A kind-faced, 68-year-old politician in comfy slacks and blue shirt.

Today, Jeremy Corbyn embodies Glastonbury more than anyone or anything else here. Centring on inspiration, creativity, equality, fairness and harmony, the Labour leader’s speech is lengthy but measured, his voice rasping for emphasis, left arm cutting through the air as he talks. He appears battery powered, charged with thousands of volts. Near the end, he shouts, “Peace is possible!” and the roar hits you in the chest. People are crying, families, couples and groups of friends lost in loved up embraces. He raises his arms at the end, and the damp patches on his shirt show how much he’s enjoyed this. The cacophony continues.

Corbyn’s personality is exposed, raw. It’s also intertwined with the character of Glastonbury Festival itself - were it not for the mores and ideas expressed in his speech, this event simply would not exist. And that’s why, for today at least, Glastonbury’s soul lies not in some grassy nook or cranny, but on the Pyramid Stage. From the Bootleg Beatles and Jools Holland, through Craig David, Run The Jewels and Katy Perry, and then on to The National and Foo Fighters, it’s an impactful line-up. They might not work back to back on a playlist, but these artists follow one another seamlessly on the Pyramid. There’s a different energy about this old stage today.

Before Jeremy Corbyn’s speech there was the intensity of anticipation, in the wake of it there was joy, excitement. It lingers until the last note of the Foos. It’s often said that this festival is about people, and when a huge bundle simultaneously come together to experience precisely the same emotion, the result is electric. And that’s how it feels to be anywhere near the Pyramid today.