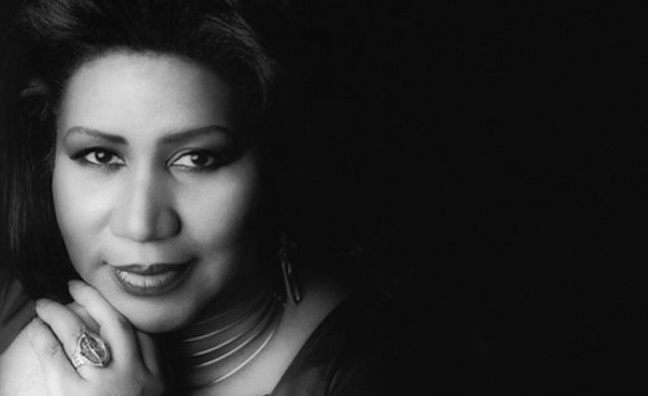 A statement from her publicist confirmed that the Queen Of Soul died surrounded by her family in Detroit. Tributes immediately poured in from fellow artists, including Barbra Streisand, Carole King, John Legend and Liam Gallagher, as well as label executives.

The singer was diagnosed with cancer in 2010 and announced her retirement from performing last year. Her final performance was at a gala for the Elton John AIDS Foundation in November 2017.

Franklin’s notable UK hits included a No.1 with George Michael on I Knew You Were Waiting (For Me) in 1987 and a Top 10 single alongside Eurythmics with Sisters Are Doin’ It For Themselves in 1985.

Max Lousada, CEO, recorded music, Warner Music Group and CEO/chairman, Warner Music UK, said: “There are great artists and there are transcendent artists – artists who break new barriers and take us to places we never imagined. Aretha elevated soul from genre to high art. She defied musical categorisation, bringing her phenomenal talent to R&B, pop, blues, gospel, rock, jazz, and classical music. Aretha’s influence on music, culture, and history is incalculable. We will be forever grateful for everything that she accomplished as an artist, a woman, and a beacon of humanity.”

Atlantic Records’ Craig Kallman & Julie Greenwald added: “Aretha Franklin was a pillar of Atlantic Records and transformed global culture. From that day in January 1967, when producer Jerry Wexler took Aretha to Muscle Shoals, Alabama and she sat down at the piano to record her first Atlantic record, I Never Loved A Man (The Way I Love You), music was never the same. Back then, there was no one who sang the way she did, who took the roots of gospel and R&B and infused them with that originality, power, fervour, and depth. Aretha was always in charge – of the songs she sang and the songs she wrote; how she sang them and how she played them. In her dozen years with Atlantic, she created a phenomenal body of work that entered the timeless musical canon and has had an unequaled impact on artists across the globe.

“Aretha’s prodigious talent came from a place of honesty, integrity, and strength, and her boundary-breaking approach extended far beyond her music. She was a tireless champion of civil rights and social justice, and above all, a global citizen who strived her entire life to erase boundaries of race, culture, gender, and nationality. All of us in the Atlantic family are deeply proud to be a part of her extraordinary legacy. Our thoughts and prayers are with her friends and family at this very difficult time.”

In a statement, Sony Music said: Aretha Franklin was one of the most iconic voices in music history and a brilliant artist. Over the course of her decades-long career, which included many years with the Sony Music family, she inspired countless musicians and fans, and created a legacy that paved the way for a long line of strong female artists. Sony Music joins the world in mourning her passing."

Franklin was born in 1942 in Memphis, Tennessee. One of four children, her father was an itinerant preacher while her mother was an accomplished piano player.

In 1954, Franklin sang her first solo at the New Bethel Baptist Church in Detroit, where her father was a pastor. She began to sing there regularly, and her father became her manager.

What a life. What a legacy!
So much love, respect and gratitude.
R.I.P. @ArethaFranklin https://t.co/400K1U5IHI

This photo was taken in 2012 when Aretha and I performed at a tribute celebration for our friend Marvin Hamlisch. It’s difficult to conceive of a world without her. Not only was she a uniquely brilliant singer, but her commitment to civil rights made an indelible impact on the world.

Let’s all take a moment to give thanks for the beautiful life of Aretha Franklin, the Queen of our souls, who inspired us all for many many years. She will be missed but the memory of her greatness as a musician and a fine human being will live with us forever. Love Paul pic.twitter.com/jW4Gpwfdts

There was a GENIUS that walked this Earth . She was a BLACK WOMAN . She gave us the BLUE PRINT . She RAISED THE BAR . She LAID THE FOUNDATION and her name was QUEEN ARETHA FRANKLIN . We could not forget you if we tried . I am infinitely THANKFUL . #GENIUS #4everbowingtoyouQUEEN pic.twitter.com/z7QjHLW5wI

I don’t know of an artist alive today who hasn’t been inspired by Aretha Franklin... she gave voice to the most important declaration for women of our time and it still stands today... RESPECT... Rest in peace queen #QueenofSoul #TCB #Respect pic.twitter.com/aYyBYf7JJ2

Rest easy #ARETHAFRANKLIN I imagine u in heaven performing & still making people souls move???????? this was my aunt favorite record #RockSteady you will always be the Queen of Soul you been that before many of us were born! Thank you for giving us LEGENDARY TIMELESS music ?????????? pic.twitter.com/bEueBCLGJ9

“I'm using to the highest degree possible the gift that God gave me to use. I'm happy with that."
-#ArethaFranklin
Thank you, #QueenofSoul. #Respect #RIP pic.twitter.com/zlFdDyzlY5

In 1956, she released her first album on JVB Records, Songs of Faith. She later signed to Columbia Records and debut single, Today I Sing the Blues, was released in September 1960.

Her first secular album, Aretha: With The Ray Bryant Combo, was issued by Columbia in 1961.

Franklin signed with Atlantic records in November 1966, choosing not to renew her partnership with Columbia. She later moved to Clive Davis’ Arista Records in 1980.

She released 42 studio albums as well as dozens of compilations and is estimated to have sold 75 million albums worldwide. In the US, she scored 20 No.1 singles on the R&B charts, including Respect, Baby I Love You, Chain Of Fools and Bridge Over Troubled Water.

Her final album, A Brand New Me, was released in November 2017 by Rhino Records and Atlantic Records. It featured archival vocal recordings that Franklin recorded for Atlantic, accompanied by new orchestral arrangements by the Royal Philharmonic Orchestra and newly recorded backing vocals.

Franklin’s achievements include 44 Grammy nominations and 18 wins, 10 of which are for Best R&B Vocal Performance.

Franklin performed at the inaugurations of three US presidents: Jimmy Carter (1977), Bill Clinton (1993) and Barack Obama (2009). In 2005, President George W. Bush awarded her with the Presidential Medal of Freedom.