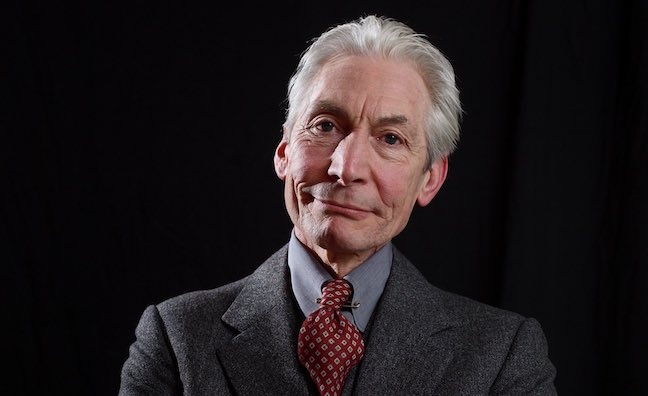 Charlie Watts once said that “rock’n’roll has probably given more than it has taken”. Few have ever given more to rock’n’roll than the legendary sticksman. The stylish, unassuming backbone of the Rolling Stones, Watts was never one to seek the limelight, but his contribution to pop culture belongs firmly front and centre.

“It is with immense sadness that we announce the death of our beloved Charlie Watts,” said a statement by the band following his death aged 80. “He passed away peacefully in a London hospital earlier today surrounded by his family. Charlie was a cherished husband, father and grandfather and also as a member of the Rolling Stones, one of the greatest drummers of his generation.”

Watts, Mick Jagger and Keith Richards were the only members to appear on all of the Stones’ studio albums to date – from their eponymous 1964 debut to 2016’s chart-topping, Grammy-winning Blue & Lonesome (355,983 sales, OCC).

As recently as last year, the Stones were still breaking records, reaching No.1 with the expanded edition of 1973 album Goats Head Soup (97,704 post-1994 sales) via Polydor. The release gave the group 13 chart-topping albums, putting them equal with Elvis and Robbie Williams. Only The Beatles have achieved more No.1 albums in the UK (15). The Stones will drop 40th anniversary editions of 1981 classic Tattoo You on October 22.

Born in London in June 1941, Watts took up the drums in his early teens and became the Stones’ drummer in 1963 after meeting Jagger, Richards and the late Brian Jones on the capital’s rhythm and blues club scene. Putting his previous career as a graphic designer to good use, Watts had a hand in the artwork for the band’s 1967 LP Between The Buttons. His eye for design would come in handy in later years as the group’s touring productions became increasingly cutting-edge.

“Typically, Mick and Charlie have been the two people who have always been more interested in the design,” the band’s longtime creative director Patrick Woodroffe told Music Week ahead of the UK leg of their 2017/18 No Filter run The 60-date world tour, which would prove to be Watts’ swansong, was attended by more than 2.2 million people and fetched $415.6m at the box office.

A crowd of up to 1.5 million is estimated to have been in attendance for the Stones’ free 2006 gig on Copacabana Beach in Rio, Brazil, while the group famously played to around 500,000 people in a free outdoor concert in Havana, Cuba in 2016. Watts, however, was famously indifferent to the band’s acclaimed 2013 headline bow at Glastonbury (“It’s not what I’d like to do for a weekend, I can tell you”, he said humorously), which was followed by the band’s return to Hyde Park for the first time since 1969 as part of their 50th anniversary tour.

“One of the real privileges of working with them for a long time if you’re a Stones fan is those funny, odd conversations you have sitting in the catering room at a rehearsal,” added Woodroffe. “Suddenly hearing Charlie tell you a story about Brian Jones; or Keith and Mick reminiscing about some show they did back in the ‘70s. This is all in the history books, but to actually hear it being told by the people who were there at the time was a real treat.”

Watts, who was diagnosed with throat cancer in 2004, pulled out the Stones’ upcoming US tour earlier this month after undergoing an unspecified medical procedure. His last public performance with his bandmates saw him play “air drums” over Zoom for the Global Citizen livestream One World: Together At Home in April 2020 in support of the global response to the Covid-19 pandemic.

"Charlie was a naturally instinctive drummer for all generations and he will be greatly missed," said Universal Music Group chairman and CEO Sir Lucian Grainge. "His incomparable contributions to the genesis of popular music culture will continue to inspire and influence musicians and fans for years to come."

A renowned jazz fan, Watts also released records under numerous other monikers including The Charlie Watts Quintet and The Charlie Watts Tentet. He is survived by Shirley Ann Shepherd, his wife of 57 years, daughter Seraphina and granddaughter Charlotte.

A host of top names across the industry took to social media to mourn the legendary drummer. You can read a selection below...

A very sad day. Charlie Watts was the ultimate drummer. The most stylish of men, and such brilliant company. My deepest condolences to Shirley, Seraphina and Charlotte. And of course, The Rolling Stones.

All of us at UMG are shocked and saddened at the loss of Charlie Watts. ???? pic.twitter.com/H7ccNyPsil

#RestInBeats #CharlieWatts -session invited by the great ?@bernardfowler? ?@RollingStones? rehearsing 3 hrs of #StickyFingers for concerts.Mick pulled out the the salt & started his dance even. Mr CW finished a roll & pointed his sticks at me!?-I was like Who me?Wtf! pic.twitter.com/S3rg5vYe7Q

Of course he was...
Pretty much every bloody night...
Elegance personified in every respect...
Even on that Ya Ya’s sleeve...#charliewatts #RIP #ourdarling #always ?? pic.twitter.com/U282Tc1rHP

Very sad news but what a cultural legacy this great man leaves the world. https://t.co/VXxhMUS9Wk

I hope he’s on a cloud keeping rhythm for a choir of angels….

Very sorry to hear of the passing of legendary Rolling Stones drummer Charlie Watts. Our condolences to all friends and family https://t.co/D6ACbGpFwf

Aside from being a unique musician Charlie Watts managed to remain completely classy throughout the whole of the Rolling Stones career. Quite an achievement. #charliewatts

Rolling Stones drummer Charlie Watts dies aged 80 https://t.co/LUVShR1yaM via @YahooNews AWFUL NEWS. One of the true timeless icons and the backbone of the Stones. Hard to fathom the loss. So very sad.

“The challenge with rock and roll is the regularity of it. My thing is to make it a dance sound; it should swing and bounce”

So sad to hear of the passing of Charlie Watts. No band has lasted like @RollingStones Since the heady days of @TheEalingClub and their friendship with the late Alexis Korner he has been the driving force of some of the greatest music ever made. #CharlieWatts #RIP

In 2020 I painted his portrait as part of a series on my musician friends.?
Charlie Watts.?
A prince among thieves.?
A gentleman through and through.?
Rest in Peace. ?? pic.twitter.com/WO2H3ArDDo

Buddy would like to offer his deepest condolences, his love, and his prayers to the family of Charlie Watts, to Mick, Keith, Ronnie, and to everyone in the Rolling Stones camp. Friends till the end. All our love. ?? - Team BG pic.twitter.com/JeKzHxzLph

So sorry to hear the very sad news of Charlie Watts passing. He was such a nice guy and a major influence in the music business - he’ll be sadly missed. My deepest condolences to his family and to Mick, Ronnie, Keith and all his friends and fans. R.I.P.

"Charlie Watts is one of the greatest drummers the damn world is ever gonna see."

Rock n roll would not be rock n roll without the rhythm, the style, the VIBE of this incredible musician. Rest In Peace #CharlieWatts, one of the greatest and most important architects of the music we love. pic.twitter.com/xEfzaSLCba

You've given our artists some of their best memories and for that we'll forever be thankful.???? pic.twitter.com/5kTcfrfmx0

Charlie, u will truly be missed. U’ve done so much for us musically and as a drummer. One of the best. Rest In Peace ???????? pic.twitter.com/92WwUNGtX8

Charlie Watts was the most elegant and dignified drummer in rock and roll. He played exactly what was needed - no more - no less. He is one of a kind. pic.twitter.com/aasPZ2fMYX

Sad to hear of Charlie Watts passing. The Rolling Stones have always been my favorite band, and Charlie was the engine of subltle and heavy grooves. I’ll put on “Sway” which is my favorite song of all time. Any of us in a rock band wouldn’t be here if it hadn’t been for Charlie. pic.twitter.com/0GsCAIEIO3

Thank you for everything, Charlie. A giant. A legend. A gentleman.