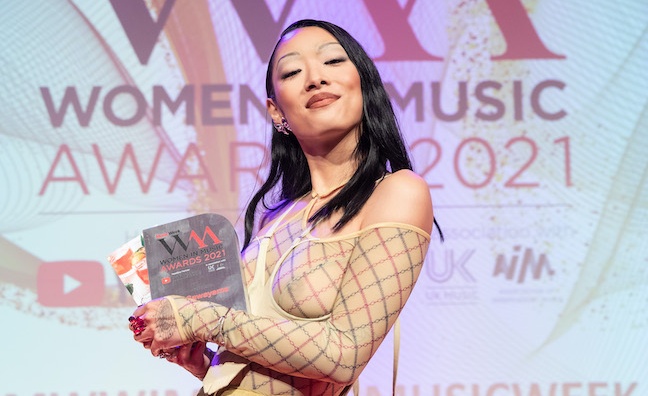 Rina Sawayama won the New Artist award (sponsored by PRS For Music and PRS Foundation) at last month’s Music Week Women In Music 2021 awards ceremony. It was in recognition of her debut album, Sawayama, released by Dirty Hit in 2020.

She’s finally getting to tour the acclaimed album after the reopening of venues, and will this week play O2 Institute Birmingham (November 15), Electric Brixton (16) and the Roundhouse (17), which is her biggest headline show to date.

Earlier this year, Rina Sawayama secured a change in the rules on eligibility for the BRITs and Mercury Prize after learning that she was not allowed to compete. Sawayama, who holds a Japanese passport, has lived in the UK for more than 20 years and has indefinite leave to remain.

Under the new rules announced by the BPI, artists qualify for the main prizes if they have been resident in the UK for more than five years. Previously, both the BRITs and Mercury Prize required artists to hold British citizenship.

Here, Rina Sawayama talks about her campaign, life as an independent artist with a fearless vision and the industry figures who have supported her journey...

You released your debut album last year when the pandemic hit. Why did you go ahead, unlike many artists at that time?

“Yeah, it was April of 2020. I really wanted to go for it because I thought that people just needed some music. It was my first album, and Dirty Hit are the kind of label that goes, ‘Fuck it, let’s try it’. So we just tried it and it kind of worked. I'm just super-surprised at how things have turned out.”

The Sawayama album was a bold statement of intent for a new artist, with multiple genre influences. How did Dirty Hit support your vision?

“The record was about 80% done by the time I shopped it around different labels. I could gauge when some labels would just say what I wanted to hear, but I didn't really feel the passion behind it. Jamie [Oborne, Dirty Hit founder] was the only person that literally burst out laughing so hard when he heard STFU!. I knew that he got it. Then when I played him Comme des Garcon (Like The Boys), he was completely in love with the music.

“Dirty Hit have never, ever told me to write a certain kind of song. They’ve always let me lead the vision, sonically and creatively. It’s the same with this new record I'm writing. They have only been supportive with the artists, producers and songwriters that I want to work with, they have never told me what to do. It's been an amazing partnership and collaboration.”

How’s your experience been as a debut album artist?

“It’s super-positive. I'm really grateful for the people who let me tell my story. A lot of labels didn't agree with releasing STFU! as the first single, Dirty Hit were the ones that said, ‘Let’s do it!’. I really am so grateful, I’m just standing on the shoulders of giants.”

You’ve finally got to tour the album. What’s the live-set up for the gigs?

“I now have a band, I have a drummer and a guitarist. I have two dancers. At some of the bigger shows, I have screens. It’s just trying to tell the story of the album in a way that involves the audience as well.”

You helped to change the eligibility rules for the BRITs and Mercury Prize after you weren’t allowed to compete. Did it feel like a snub seeing as you had lived in the UK for more than 20 years?

“I didn't think it was a snub. I mean, I always think I'm trash! I only thought it was a snub because other people said it was a snub. I was just really empowered by my team to say something about it. I have a wonderful team who advised me on how to go about getting this message out there, because I could have easily tweeted my discontent, but I didn't. I really wanted to make sure that it was educational, and not hateful. The result is awesome, and I had a really great conversation with the BPI.”

Did that make you feel that positive change is a possibility?

“I feel lucky that I have a really engaged audience. Social media can get very hateful, so for this to be positive change is amazing. I try to lend my voice to anything I’m passionate about, like HIV/AIDS [awareness], gay rights.” 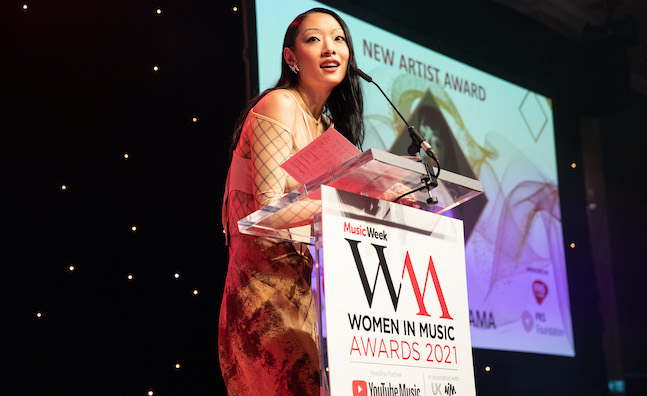 How did it feel to be honoured in the New Artist category at the Women In Music Awards?

“It was incredible. Like I joked on stage, it's awesome to be eligible for these awards and I'm grateful to Music Week for supporting me, also to [awards sponsors] PRS and YouTube as well, who have been so supportive of me as an independent artist. It’s damn hard being an independent artist! I'm really glad that I was with my label, Dirty Hit, who I love, Jamie [Oborne] who I love, and Perdi [Higgs, streaming & digital promotions manager] who presented the award.”

How did you enjoy the ceremony?

“I got day drunk, which was awesome. I was quite nervous about my speech, but I think it was fine. I loved hearing people's stories actually, it was really inspiring how it’s so community-led, and hearing about the diversification of the music industry. Just seeing the different struggles and triumphs that people have gone through on different paths in the music industry was awesome.”

Is it important that artists get support too?

“Yeah, my label recently started this initiative where they will pay for artist’s therapies if they need it, which I think is so important. That's the conversation I've had a lot with my A&R Chris [Fraser]. he's very passionate about mental health. So that's really important, the fact that this destigmatises mental health, it’s available and the label supports that journey. Because undiagnosed mental illness leading to addiction issues is so common in artists.”

Have you had any mentors who supported your career development?

“I would say I've had several mentors. One of my first mentors was a woman called Vanessa Emilien, who was my first model agent at Elite. She was the only one who picked me up, no one else wanted to sign me. We've been working together ever since. The second one would be Jamie, for sure. He really spoke my language, he didn't make me feel weird and he was the change I wanted to see in the music industry. Thirdly, I would say Elton John. He's given me so much guidance and helpful advice and just been there for me, we always call each other. And I’m on his new album [The Lockdown Sessions], which is incredible [a duet of Sawayama’s song Chosen Family]. I grew up with Elton’s music like everyone else, so it was crazy. The fact that he really loves the music and the lyrics, and was just happy to sing it as it was, that was insane. I love Elton, I love David [Furnish], I love the kids, they’re a wonderful family.”

How did you record the duet?

“It was virtually agreed and then we did meet in person. It was at Elton’s studio in London in November last year, so it was the height of the second wave. I had to quarantine for two weeks. Elton quarantined as well, we took loads of tests. Elton described it as like going back to his session player roots. It was just him being so collaborative and open to ideas. He’s such a muso, in the studio he just really just counts himself as one of the players.”

What are your plans for a new album?

“I’m just trying to finish writing it, I’m working with some incredible people. I’ve got a couple of songs with Paul Epworth. Stuart Price is working on a lot of the album. Most of the songs were started with me and Clarence Clarity, so it’s still got that core that Sawayama had. I just want to write really big songs, songs that make me feel a certain way. All these newcomers have been incredible. So much of it was written during lockdown on Zoom sessions, which I hated. But somehow they yielded good songs. It will be out next year, hopefully.”

Click here for more interviews with winners at the 2021 Women In Music Awards.