Rod Stewart, Stormzy and Harry Styles in battle for Christmas No.1 album 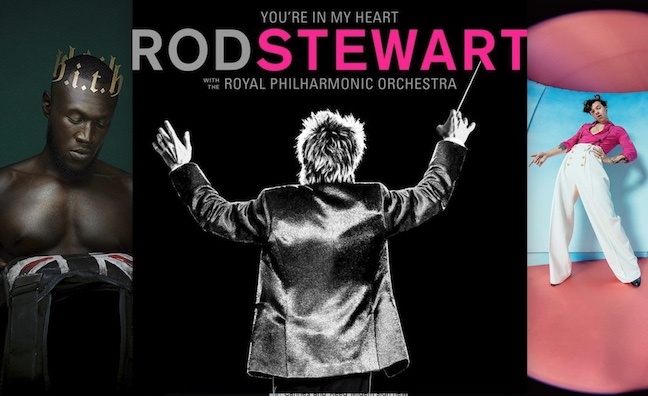 Rod Stewart has edged ahead in the three-way chart battle for the No.1 album at Christmas.

But in a sluggish Q4, the final victor is set to post a total well under 100,000, a benchmark for sales in the week before Christmas.

According to Music Week research, the biggest artist album in the Christmas chart has only been below 100,000 once before during the last decade (see below for the full breakdown).

You’re In My Heart (Rhino), Stewart’s orchestral album with the RPO, is on 48,360 sales, according to the latest Midweek sales flash from the Official Charts Company.

But Stormzy’s sophomore album Heavy Is The Head has moved up to second place from No.3 earlier in the week. It also has a much higher streaming ratio, with 16,583 of its 40,401 sales made up by streams. Stewart only has 500 sales-equivalent streams, so the UK rapper could narrow the gap in the days ahead.

It's great to see all three of them up there together

Harry Styles’ second album Fine Line was at No.1 in Monday’s sales flash, but is now at No.3 on 37,955 sales (including 9,461 from streams). The album will get a further push with promotional and live activity.

“You’ve obviously got two massive albums that have been released this week, competing against Rod Stewart,” said Martin Talbot, chief executive, Official Charts Company. “It's great to see all three of them up there together.”

Robbie Williams, Coldplay, Michael Ball & Alfie Boe and Lewis Capaldi are all above 20,000 sales so far this week. Sales skew heavily towards physical at this time of year.

According to a poll by ERA, Coldplay's Everyday Life came out on top of all respondents' music wishlists for Christmas, and most strongly in the 45-54 age group. Lewis Capaldi's debut was the choice of those surveyed under 34, while Robbie Williams was the choice of consumers aged 35-44. For reponsdents aged 55-plus, Rod Stewart was the top choice for Christmas.

But at a challenging time for physical music, retail has already expressed some concerns about key releases coming late in Q4. The figures below reveal the biggest Christmas week No.1 album for last decade, though Now compilation albums actually came out on top for all album sales in 2012, 2013 and 2016.