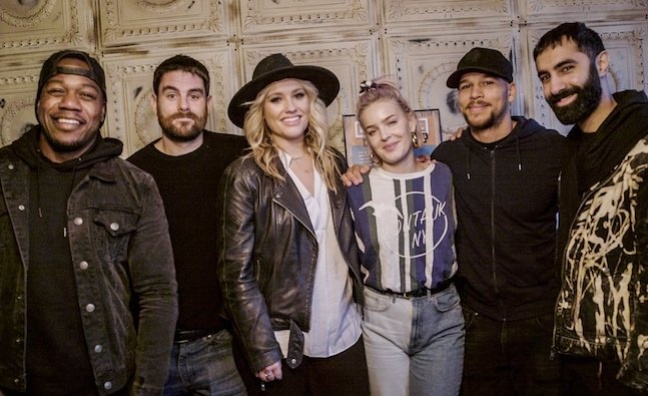 Ella Henderson has signed to Rudimental’s Major Toms label, which has a partnership with Asylum/Atlantic.

The former X Factor contestant was previously signed to Syco and her 2014 debut, Chapter One, debuted at No.1. It has sales to date of 464,644, according to the Official Charts Company.

“We’re proud to welcome the amazing Ella Henderson to the family,” said Rudimental. “She’s an exceptional talent and we’re so excited for what’s to come.”

“I’m so happy and excited to have signed with an amazing group of artists, musicians, producers and friends,” said Henderson.

Major Toms was the development label for fellow Rudimental collaborator Anne-Marie (pictured with Henderson and Rudimental) to forge a solo career. She’s scored the year’s biggest UK breakthrough with debut Speak Your Mind.

Rudimental’s third album, Toast To Our Differences, is released on January 25. Both of their previous albums peaked at No.1, while Jess Glynne collaboration These Days was the group’s third chart-topping single earlier this year.