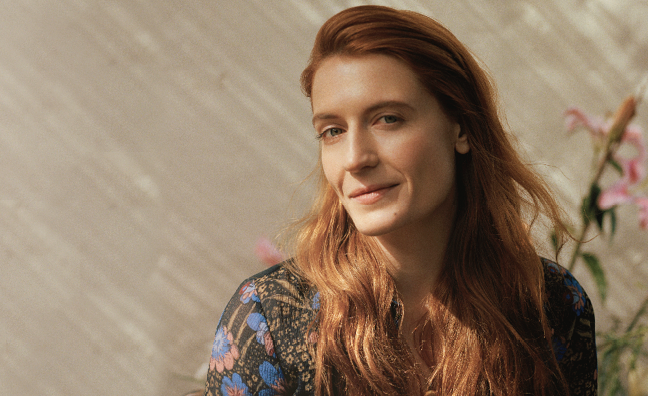 Florence + The Machine are taking on the mighty Drake in this week’s chart battle. High As Hope, the fourth LP from Florence Welch’s band, follows three consecutive chart-toppers and a strong sales track record, including 1,773,314 units (OCC) for debut Lungs.

Featuring co-writing contributions from Jamie xx and Sampha, High As Hope is also the first of the group’s albums to have Welch credited as co-producer. Here, Virgin EMI president Ted Cockle takes Music Week inside the comeback from an artist he’s worked with from day one…

What are the ambitions for this record?

I wouldn't want to put any number on it, we just feel that the record she’s made is at the highest level of Florence’s repertoire, it matches up with everything she’s done, Pleasingly, the American company [Republic Records] feels that this is an an important artist and it will be given as much muscle and as much resource to find as many fans as possible. In a changing market, the ability to sell an album becomes increasingly difficult but if anybody has a chance of holding onto the value of an album, I’d put Florence in that category.

Does her co-producer credit signify her growing confidence in the studio?

She’s now four albums in and she’s learnt a lot about studio technique. She’s always had some clarity on how she wants her records to sound – she’s never handed the record over to people and said, “I’ve written the songs, produce it how you want.” She’s always been able to articulate exactly what she wants to do. With Emile [Haynie, producer] there’s a lovely balance. He’s obviously someone who knows about the exact button or the exact name of the reverb that was needed on it, but she does give the indication of what she wants it to sound like.

The press announcement also suggested she toned down the partying…

It may not be fueled by some of the things that fueled her in the past, but she likes a big night out. We always say she’s half rocker and half raver, she’s always had one foot in the dancefloor and that continues. She obviously comes across as quite serious about the craft but she’s properly mischievous. When you hear the song South London Forever, there is proper wit. I think that sometimes get a bit overlooked with Florence because it’s normally powerful and it’s serious and trying to convey her inner thoughts.

Will Useless Magic, her new book of poetry and lyrics, feature in the campaign?

It is tied in. Florence can’t help but do stuff, it’s just what she does. If you follow her social networks, there’s always a drawing, or a lyric, or a poem, it’s just what she has to do. We’ll say, “Can you announce the tour dates?” [on social media], and she’s like “No”. Then in the next few minutes there will be another poem or another thought of hers – that’s how she expresses herself.

To read Music Week’s full interview with Ted Cockle on the Florence + The Machine campaign and streaming strategy, subscribers can click here. To subscribe and never miss a big industry story click here.