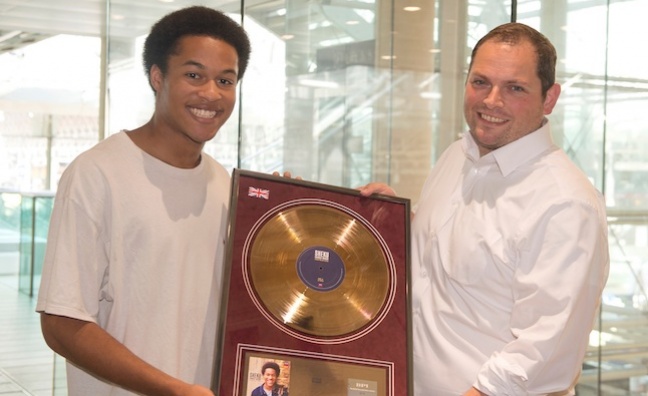 Teenage cellist Sheku Kanneh-Mason has become the first artist ever to receive the new BRIT Certified Breakthrough Award, after selling 30,000 copies of his debut album in the UK and 100,000 album sales worldwide.

The new award is an extension of the platinum, gold and silver awards, certified by the BRIT Awards and the BPI, and issued to artists who have achieved notable sales landmarks.

Kanneh-Mason's first album, which he recorded with the City of Birmingham Symphony Orchestra, was a selection of his favourite music from Shostakovich to Bob Marley.His performance at the Royal Wedding in May brought Kanneh-Mason to a global audience and worldwide success.

The record is the top selling classical album for 2018 in the UK with 13 weeks at No.1 (the longest an artist has held that position this year) and No.1 on the classical charts in the US, France, Australia and New Zealand. He also topped the Emerging Artist chart in the US – the first classical musician ever to do so.

Kanneh-Mason has recently performed shows in the US, Switzerland France and at the BBC Proms at the Royal Albert Hall, following a double win at the Classic BRIT Awards at the same venue.

Sheku Kanneh-Mason said: “It’s so amazing to be given this BRIT Certified Award and I’m still overwhelmed by the incredible response to the album from around the world. I’m so happy that people are continuing to enjoy my playing and I hope it encourages them to explore music further.”

Geoff Taylor, chief executive of the BPI & BRIT Awards, said: “Sheku has enjoyed a remarkable 12 months, winning over an army of fans and numerous accolades, including two Classic BRIT Awards. It’s hard to think of a worthier recipient of the first BRIT Certified Breakthrough Award to be presented, and I am sure that Gold and Platinum discs will now follow!”

Dr. Alexander Buhr (pictured with Kanneh-Mason), MD of the Decca Classical Label Group, said: “We are incredibly proud of Sheku. It is a great sign that a classical musician is the first artist to receive this new award, proving once more the power and appeal of this genre. Sheku is a unique artist who couldn’t deserve this more, and it’s important to remember that his career has only just begun!”