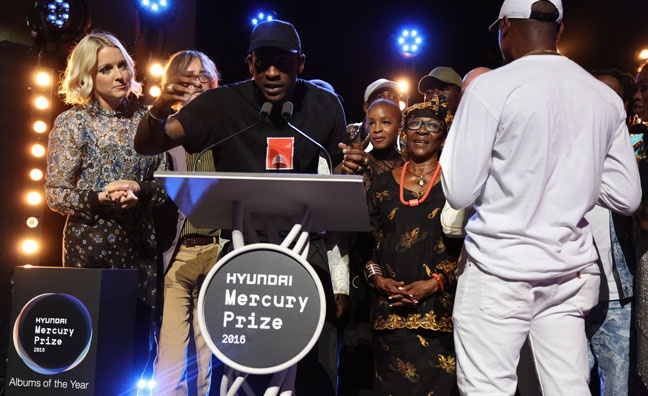 Skepta has won the 2016 Hyundai Mercury Prize for his latest album, Konnichiwa.

The grime artist came out on top out of six shortlisted finalists: David Bowie, Laura Mvula, Michael Kiwanuka, Radiohead and The 1975, who won the public vote. Anonhi, Kano, Bat For Lashes, Savages, The Comet Is Coming and Jamie Woon were also nominated. Bowie's Blackstar, the event's first posthumous nominee, had been the odds-on bookies' favourite to claim the prize.

Konnichiwa was released in May via indie label Boy Better Know Records. On collecting the winner’s trophy and cheque for £25,000, Skepta said: “The star is the person on the mic who always gets seen but I want to say thank you to every single person who made Konnichiwa happen.” The judging panel said: “This is such a great record!  Confident, funny, clever, scary, personal and political. Skepta makes music for our times.”

The awards show was held last night at the Eventim Apollo, Hammersmith, and was broadcast live on BBC Four and BBC Radio 6 Music. Actor Michael C Hall, who plays the lead role in Bowie's musical Lazarus, performed a tribute to the singer at the event.

All other nominees played live at the venue with the exception of Radiohead, who were unable to attend. A Paul Thomas Anderson-directed video of Present Tense from the band's A Moon Shaped Pool album featuring singer Thom Yorke and guitarist Jonny Greenwood performing the track, was screened at the awards in their absence.

The 12 nominated albums were chosen solely on artistic merit by a panel of judges including Jessie Ware, Naughty Boy, Jamie Cullum, Clara Amfo and Jarvis Cocker.