'Something's got to change': Bebe Rexha, Rita Ora and Sarah Stennett on Women In Harmony 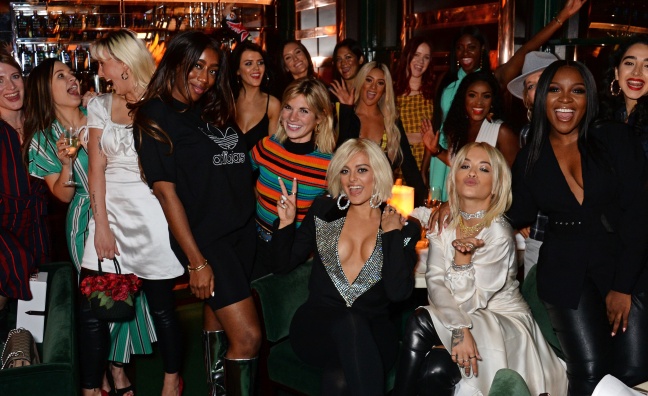 Bebe Rexha, Rita Ora and First Access Entertainment CEO Sarah Stennett have been talking about Rexha’s Women In Harmony initiative, which aims to support female creatives in the music industry.

Rexha and Ora co-hosted WIH’s first UK event for a host of songwriters and producers, including Ray Blk, Nicola Roberts, Rachel Furner, Carla Marie Williams, Amy Wadge and many others at Casa Cruz in London this week. And the pair held forth on the organisation, which Bexha launched earlier in the year in Los Angeles.

Rexha, managed by Adam Mersel at FAE, cited stats from the US that showed Top 40 radio was dominated by male artists and said: “When I found that out, I was really upset and I was like, ‘Something’s got to change’, so I decided to put something like this together. I didn’t care what level of success anybody was at or if you’re an engineer, a songwriter or producer. But I wanted to keep it for creative females and create an environment where you can network, where you feel safe, and can talk about journeys, stories, things we’ve gone through.

“They say a lot of the time that females are competitive,” she added. “The reason why we’re competitive is from that statistic: how are we supposed to sit at the table if there’s not enough room for us? So we are here tonight because we’re going to make room for other females coming in. This is for us to have a bond, where we can not only support each other, but pave the way for newer artists coming in. Because you know how scary it was when you first started, you were like, ‘What the fuck do I do? Who do I trust? What lawyer, what business manager, publishing, I don’t know what the fuck is going on’. You’re hoping the whole time that nobody screws you over. Just being here tonight is making a change.”

Rexha also criticised the double standards in the industry for male and female creatives.

“I have never heard anybody talk about a male in the industry and say that they were ‘emotional’ or ‘all over the place’,” she said. “Not once. But I’ve heard it about female writers, about female artists. We just have to keep doing what we’re doing and ignore those people. If you’re going to call me a bitch, call me a bad bitch.”

Ora, who will release her long-awaited second album later this year, pledged her support for the venture.

“I’ve never been a part of anything this strong,” she said. “The energy in this room and the people I know are so positive. Seeing someone like Bebe, that’s so outspoken and so proud of who they are and where they come from and writes their own shit and represents themselves and still wants to help other people and sees people for who they really are… That touched me in a way that I don’t think I can compare to anyone I’ve ever met in this industry.”

Ora said her own experiences had taught her the value of female support.

“When I first signed my record deal I was 18,” she said. “And like many successful women and artists in this business, the opportunity that presented itself to me required me to move to New York. It was lonely and very scary at times, and even though I had a pretty much all-female management team to support me, I still lacked the friendship and mentorship of female creatives. When I heard the idea for Women In Harmony, I thought it was brilliant. As a woman in this industry it’s important that we support each other.”

“I’m really pleased to see so many incredible women and the odd man here to support this. I’ve never ceased to be amazed by the dedication of Bebe and Rita and the support that they have given to other females in the community. Their actions have certainly inspired me to keep going every day and to keep fighting. I’ve definitely been ‘crazy’, ‘emotional’, all the other words, so thank you for your relentless spirit, both of you. This is an amazing thing, I hope that we can continue your initiative around the world.”

Further Women In Harmony events are planned, including a Grammys brunch.