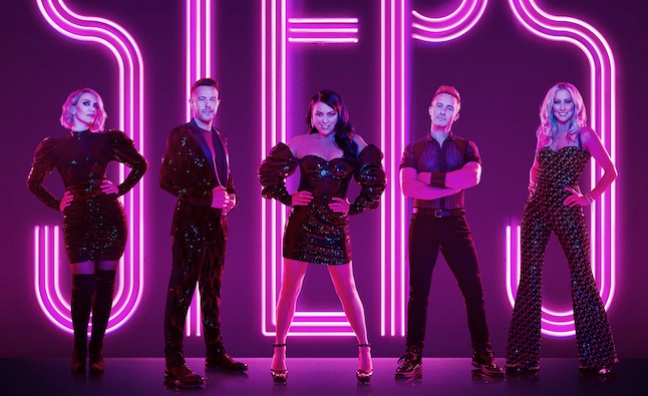 Steps are to release a new album, What The Future Holds, on November 27. The group have signed to BMG for what is set to be a major Q4 release from the company.

It will be followed by the What The Future Holds 2021 Tour, starting in Sheffield on November 2, 2021.

The group – aka Claire, Faye, H, Lee and Lisa – premier the first single What The Future Holds tomorrow (September 9) on Zoe Ball’s Radio 2 Breakfast show. The album title track was written by Sia.

Next week, their tour will go on general sale from September 18 at 10am. Steps will be joined on tour by Sophie Ellis-Bextor as special guest.

Steps’ sixth studio album will be available on all digital platforms plus CD, vinyl (including a limited edition transparent pink edition) and cassette. For Steps memorabilia collectors, the album will also be available as part of a cassette collection featuring five separate transparent pink solo cassettes with an intro from each band member, all in a special collector’s box.

Steps said: “We will never forget the past with Steps, it’s what made us, but we’ve got to look to the future too. We were so thrilled that the last album was a success and it gave us a new lease of life. Performing live has always been our favourite part of being in Steps – we had the most fun of our career on the last tour and we’re already planning for the next one to be our biggest spectacle yet. We’re also thrilled to have Sophie Ellis-Bextor as our special guest on the What The Future Holds 2021 Tour – her catalogue is full of floor-fillers and she knows how to get any party started. We are so excited for everyone to hear this new album and to come join us on tour.”

In 2017, the band returned with Tears On The Dancefloor (in partnership with Absolute Label Services), which was the second biggest-selling independent album of 2017 behind Stormzy. Their subsequent tour saw the band sell out 22 arenas.