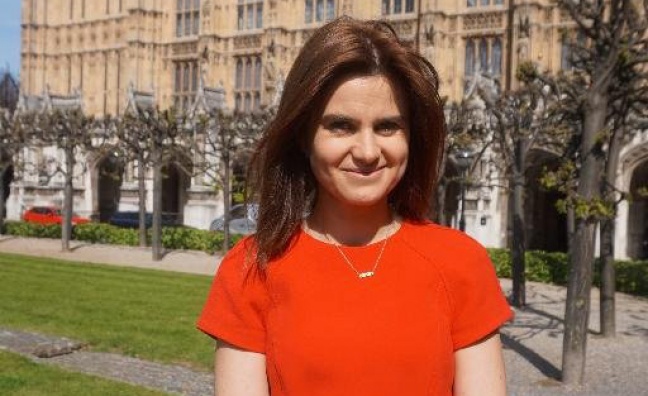 A protest single is to be released by a group of music stars and MPs as a tribute to the late MP Jo Cox.

Under the name Friends of Jo Cox featuring MP4, Steve Harley, Ricky Wilson, KT Tunstall and David Gray, the single will be the first to be released on Chrysalis Records since the label came back into independent ownership earlier this year.

Sales from the song, a cover of You Can’t Always Get What You Want by The Rolling Stones, will raise funds for the launch of the Jo Cox Foundation established after her death. The song was chosen as it called for multiple singers and choirs, reflecting a message of togetherness. It will be released on December 16, making it a potential contender for the Christmas No.1.

Harley said: “I am not really a political animal. But Jo Cox was a cut above and her legacy should be celebrated. Mrs Cox was a truly special person, and the more I learn about her life and work, the more deeply I admire her.”

The four artists were joined in the studio by Kevin Brennan, Sir Greg Knight, Pete Wishart and Ian Cawsey, all members of the cross-party parliamentary band MP4. The line up was completed by members of the Parliament Choir and the Royal Opera House Thurrock Community Chorus.

Brennan, Labour MP for Cardiff West, said: “MPs from all parties realise we should all try to be a bit more like Jo. The fact that so many people have given up their time for this project to support the causes she cared about shows that she leaves us all a legacy of hope for a better world.”

It was produced by Robin Millar, who has worked with artists including Sade, Big Country and Everything But The Girl. “This is essentially a protest record as we believe a piece of music can still make a statement," said Millar. "We wanted to create something to show that Jo Cox’s hugely selfless and energetic campaigning must live on through greater unity. 16 MPs from across the political spectrum took part alongside our artists to reflect Jo’s campaigning for Better Together. I hope by making this record we can both honour Jo and help work continue through the Foundation.”

David Gray said: “In an era of public disenchantment that has seen politics discredited by corruption scandals and characterised by political campaigns driven by hateful and divisive language, Jo Cox was that rare thing - someone you could believe in. A dedicated politician working at the heart of her community who believed in a politics of compassion and in building a fairer world. Her violent and untimely death was a tragedy for us all.”

KT Tunstall added: “With Jo she was so obviously an incredibly bright light. It’s about coming together and doing something very celebratory in Jo’s honour.”