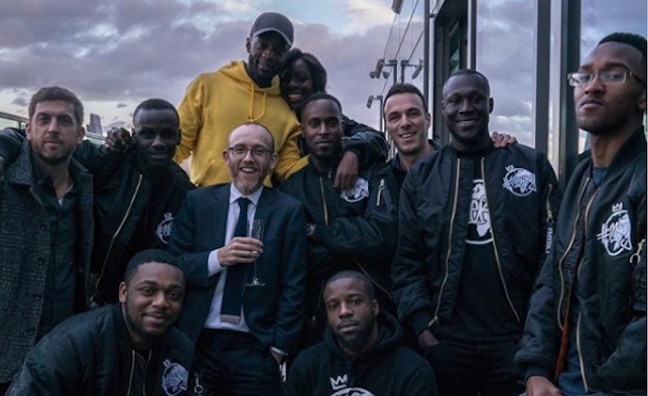 Stormzy’s lawyer Kieran Jay has moved from Lee & Thompson to Harbottle & Lewis. He has been appointed as a partner in the Harbottle & Lewis Technology, Media and Entertainment (TME) practice group, heading up the firm’s music department.

Jay spent almost a decade at Lee & Thompson as partner and helped the firm win the Law Firm Of The Year prize at the 2018 Music Week Awards.

Jay was pictured (third from left, middle row) with Stormzy and his Merky team when the rapper signed to Atlantic two years ago. Stormzy is currently pushing for a No.1 album with Heavy Is The Head.

Harbottle & Lewis has confirmed that Jay will be bringing “stellar” clients with him to the firm. As well as Stormzy, Jay’s roster of artists at Lee & Thompson included Jess Glynne, Paolo Nutini, FKA Twigs, Snakehips and Sigma.

He has represented leading artists, songwriters, producers and mixers as well as A&R execs, independent management, record and publishing companies.

“Kieran has a fantastic reputation within the music industry and beyond, and he brings with him not only his considerable legal skills but also some stellar and interesting new clients,” said Glen Atchison, managing partner at Harbottle & Lewis.

Jay added: “I am very excited about joining Harbottle & Lewis and its high-profile TME team. The firm has an excellent and established reputation, and the move offers me a great platform to expand my practice further.”

Jay also has experience in sports law having spent a number of years as a partner at Herbert Reeves & Co, advising leading Premiership footballers and managers, athletes and agents on playing contracts, image rights arrangements and endorsements, broadcast arrangements, regulatory and disciplinary issues.