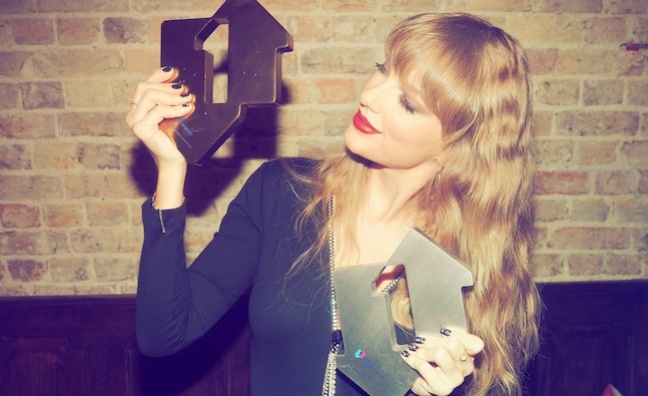 Taylor Swift has done that rare thing in recorded music in 2022 by exceeding expectations for her latest album.

At a time when even the biggest artists’ releases tend to perform less well than previous albums, in large part because of the shift to a consumption model, Swift’s 10th original studio album, Midnights, has stunned the industry in the past week. Its weekly sales are, in fact, higher than any of her previous albums by more than 100%.

Swift also secured the UK charts double with Anti-Hero debuting at the singles summit. Swift is the first female artist since Miley Cyrus in 2013 to achieve an albums and singles chart double.

Midnights (EMI) opened at No.1 with blockbuster sales of 204,501, which is more than the rest of the Top 14 albums combined. The album has also broken vinyl sales records for the 21st century, and secured the biggest weekly streaming total since Ed Sheeran’s Divide in 2017.

The result powered EMI to a 16.8% share as the No.1 label based on the All Music (All Albums) and (Artist Albums) metrics. The label also had the Top 4 singles (including former No.1 Unholy by Sam Smith & Kim Petras), and five of the Top 6 (including Lewis Capaldi’s former No.1 Forget Me).

Swift’s latest LP is the first to top 200,000 sales since Adele’s 30 in December 2021, which was itself the biggest weekly sale since Ed Sheeran’s ÷ posted 206,411 in its third week at No.1 in March 2017. Midnights is already the third biggest album of the year to date, behind Harry Styles’s Harry’s House and Ed Sheeran’s =.

Even before the final result, Midnights was declared the fastest-selling album of 2022 so far based on Midweek sales flashes. It surpassed the 113,812 week one sales for Harry Styles’ Harry’s House by the weekend.

Swift’s week one performance means that she has also beaten Harry Styles’ record for the fastest vinyl sales of the 21st century. Midnight’s staggering vinyl total of 61,948 was helped by multiple coloured editions for fans. It also sold 75,667 CDs, helped in part by the deluxe CD edition’s bonus track, Hits Different, which is not on DSPs.

Physical sales of 139,450 dominated the week one total for Midnights, but it has also been a streaming phenomenon. With 57,964 sales-equivalent streams, the album has the biggest weekly total since Ed Sheeran’s second week at No.1 with ÷ in 2017 (58,280). The ÷ week one tally of 78,944 suggests that it will hold on to that streaming record for some while yet.

Of course, the streaming performance is evident on the singles chart where, as well as No.1 with Anti-Hero (78,993 sales), Swift debuted at No.3 with Lavender Haze (51,308) and No.4 with Snow On The Beach feat. Lana Del Rey (48,417). But for chart rules limiting a primary artist to three entries, Midnight’s tracks would have made up 13 of the Top 16 entries.

In the albums chart, Swift powered ahead of chart rival Arctic Monkeys, despite a strong performance from their seventh album, The Car, which moved 119,016 copies and also improved on their previous release’s week one performance by 37.8%. Its vinyl sales of 37,866 would have set a 21st century record but for Taylor Swift’s Midnights. The pair of huge releases helped physical sales reach a 24.3% share for this chart week.

Martin Talbot, chief executive, Official Charts Company, said: “Many congratulations to Taylor Swift on her fantastic achievement in topping 200,000 sales this week. We always knew this would be a huge week for fans of Taylor and Arctic Monkeys, following the release of their brand new albums - and their combined first week total of more than 320,000 chart sales indicates that their pre-release excitement was well placed. Coming so soon after a fantastically successful National Album Day earlier this month, the successes also highlight just how popular albums continue to be in the digital era – and suggest that the pre-Christmas sales surge is underway.”

Midnights is Taylor Swift’s ninth consecutive No.1 album (including the re-recorded version of Red and Fearless in 2021). It is also her fifth No.1 in just over two years.

For Midnights, comparisons with previous Swift releases are problematic. Red (Taylor’s Version) posted 72,319 week one sales last November, but that was not an original studio album. The same applied to Fearless (Taylor’s Version), which debuted at the summit in April 2021 with 21,145 sales.

Lover, released in August 2019, had opening sales across digital and physical of 53,015. The album marked Swift’s embrace of streaming, following the windowed release on DSPs of previous albums. Reputation, released in November 2017, opened with pure sales of 83,648 (including 41,795 from paid-for downloads). It arrived on streaming platforms some months later.

Taylor Swift scored her first UK No.1 album 10 years ago in October 2012 with Red, whereas it took Madonna 21 years to reach the same tally.

The Beatles hold the overall record, racking up nine chart toppers in five years and seven months between their debut album Please Please Me in May 1963 and The White Album in December 1968.