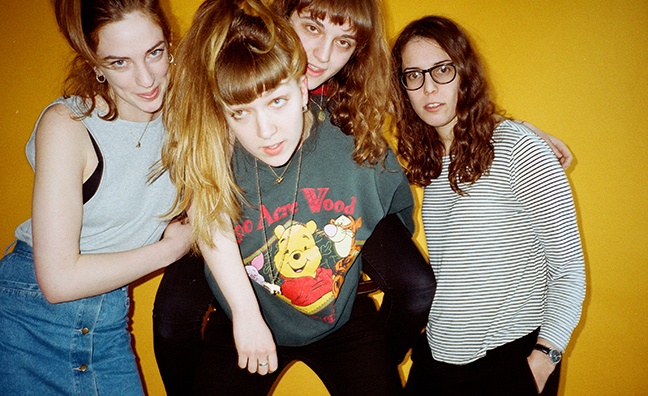 George Ezra, Blossoms, Nao, Slaves and The Big Moon have been added to the line-up for for BBC Music Introducing Live.

Held to celebrate the 10th anniversary of BBC Music Introducing, the show will take place at O2 Academy Brixton on October 4.

BBC Radio 1 DJs Huw Stephens, Annie Mac and Phil Taggart, along with BBC Radio 6 Music’s Steve Lamacq and Tom Robinson, will play host on the night, introducing a line-up of acts who have all received BBC Introducing support.

The event will be broadcast on BBC Radio 1 and BBC Radio 1’s iPlayer channel from 7pm on October 4. Tickets are available via Ticketmaster.

Bob Shennan, director, BBC Radio and music, said: “I’m incredibly proud of the work that BBC Music Introducing has done over the last 10 years to bring talented UK artists, from all musical backgrounds, to a national and international audience - whether it’s through playing their music on the BBC’s national and local radio networks, or through giving them opportunities to perform at UK and international festivals. So many of the musicians supported by BBC Music Introducing have gone on to achieve great success and this gig will be a fantastic opportunity to celebrate all that is special about new music in the UK.”

Huw Stephens added: “Ten years of supporting new talent across the BBC! We love nurturing new talent, with every show and every stage championing real musicians making music. It’s a constant, all-encompassing support that brings music to the BBC audience and we’re all very proud!”

BBC Music Introducing has been involved with discovering and supporting new music since launching in 2007. Artists it has championed have gone on to release 14 UK No.1 singles, 68 UK Top 10 singles, 28 UK No. 1 albums and 54 UK Top 10 albums between them.

There are now over 460,000 tracks uploaded to the BBC Music Introducing website, while 170,000 artists are registered. Every BBC regional radio station in the UK has a BBC Music Introducing programme dedicated to finding local talent and these musicians are then supported by BBC Radio 1, 1Xtra, Radio 2, 6 Music, Radio 3, Asian Network and World Service.

BBC Music Introducing also provides emerging artists with broadcast opportunities on television and online, as well as the chance to perform at major festivals and showcases. Of the acts performing at Reading & Leeds Festivals in 2017, 58% initially uploaded their music to the BBC Music Introducing, and the platform has brought over 100 acts to nine UK and international festivals so far this year.

Commenting on the anniversary gig announcement, George Ezra said: "The music industry was a very intimidating and confusing world for me when I was 18. I knew I wanted to perform and write for a living but had no idea how to make this a reality. BBC Introducing was and still is the most amazingly inclusive platform I could have asked for. Long live Introducing."

Blossoms said: “The BBC plays a significant part in everybody's lives in one way or another, but BBC Music Introducing (specifically) has certainly played a colossal part in ours, especially in our embryonic stage, and has continued to support us throughout. They provide a service like no other and are at the forefront when it comes to championing and nurturing new talent. We're absolutely thrilled and honoured to be a part of the anniversary celebration and even more thrilled that it's being held at such a prestigious venue, Brixton Academy. Thank you."

Nao added: “BBC Introducing were fantastic to me when I was starting out. Not only did they give me my first radio play but they put me on at Glastonbury, which at the time was a dream come true. They're a hugely important part of the BBC and a big reason why more interesting music can break through in the UK compared to other countries.”

The Big Moon, one of 12 nominees for the Hyundai Mercury Prize 2017, commented: “BBC Introducing do such great work. They've championed us from the beginning and given us the opportunity to play amazing festivals in the UK and abroad. We're incredibly grateful for their support and are so so happy to be playing at their 10th anniversary.”