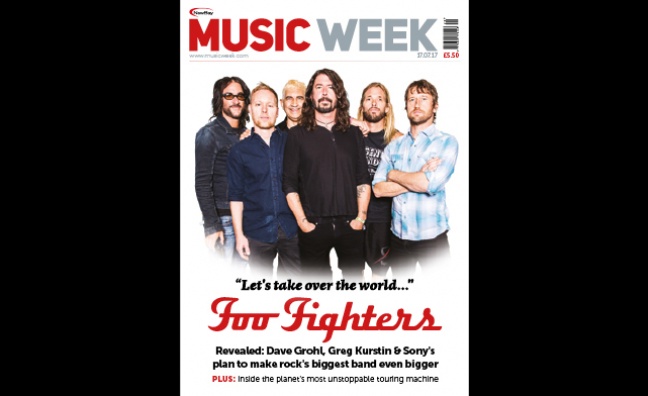 In the new edition of Music Week, we welcome Foo Fighters to the cover for a very special look at their new album campaign. For this week’s Big Interview, Dave Grohl, Taylor Hawkins, super-producer Greg Kurstin and top Sony execs tell us how their new album, Concrete And Gold - released September 15 via Columbia - stands to make rock’s biggest band even bigger.

Among the many interesting talking points surrounding the album, perhaps the most significant is that it pairs one of the biggest rock bands on the planet with one of the world’s biggest producers. In the interview, Grohl opens up about why Foo Fighters elected to work with Kurstin – producer for the likes of Adele and Sia – as a means to push their sound forward.

For Kurstin, a big part of the appeal of working with “a true heavy rock band in a time when that is becoming more scarce” was that it presented both a challenge and an opportunity for growth.

“The Foos is definitely different territory compared to what I’ve been working on,” said Kurstin. “I was excited about the change and working on something like I’d never worked on before. I would talk with Dave and scheme about this album. We wanted it to be extremely heavy at times and completely the opposite with lush musical sections and crazy interludes at other times. I was super-excited even before we started.”

"I was pysched by the idea that at this point in the band's life we were going to push the album sonically as far as we could," added Kurstin. "It usually doesn't happen like that with most bands."

Kurstin also told Music Week how the Foo Fighters pushed him on Concrete And Gold into unfamiliar – but hugely rewarding – territory.

“Dave, Taylor and the whole band would always encourage me to go out of my comfort zone, so I was trying sounds that I’ve never done before,” said Kurstin. “We were all having fun and because I had that encouragement I was confident in diving into the unknown. I learned a lot of different ways of working I never knew I was capable of. We also tried a lot of recording techniques I had never tried before.”

You can listen to the Foo Fighters' comeback single Run below.