'The freedom of expression is amazing': Fraser T Smith on the rise of UK rap 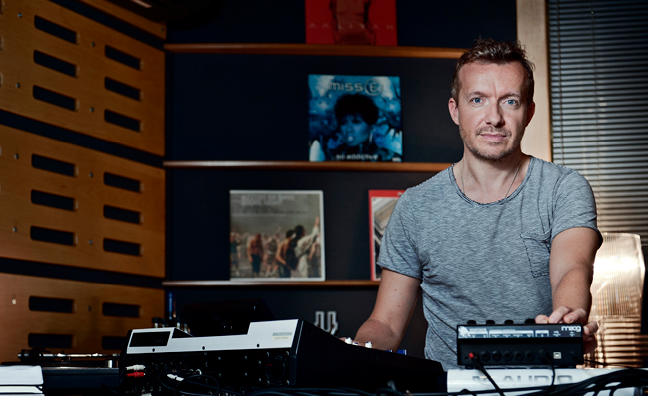 Fraser T Smith has told Music Week that the current crop of new UK rappers breaking into the mainstream is “mindblowing”.

The songwriter and producer stars on the cover of the latest edition of Music Week and has worked with a long list of A-list stars from Adele and Sam Smith, to Britney Spears and Ellie Goulding.

Smith broke through in production after helping make Craig David’s 2001 debut Born To Do It, gaining a reputation for being in tune with the UK underground in the process.

He went on to work extensively with Kano and Tinchy Stryder, and last year helmed Stormzy’s platinum-selling No.1 debut, Gang Signs & Prayer.

“It’s amazing,” he told Music Week. “I started off with Kano, and knew where he was coming from and how, commercially, there was always the art vs. commerce debate and how music had to be made to fit radio for it to work.”

Smith said Kano “trod a fine line between making commercial music and saying what he wanted to say.”

He revealed that Tinchy Stryder’s records presented the challenge of “making songs that worked on radio but still had rappers on them”.

“We had a lot of success, but the records felt like they were manufactured [in collaboration] with Tinchy,” he added. “We had to fit them into a format where it was eight bar raps, eight bar pre-choruses and then big choruses with featured singers.”

There was always the art vs. commerce debate and how music had to be made to fit radio for it to work

Alongside Stormzy, who won the BRIT Award for Best British Album this year and baited Theresa May during his performance, Smith is also working with South London MC Dave.

“What’s amazing now is the freedom of expression,” he said.

“Tracks like Question Time can be winning awards and have huge views on YouTube, hard-hitting tracks like Big For Your Boots can be played all day on radio. Blinded By Your Grace, which is essentially a hymn that Stormzy and I wrote with MNEK, can have big appeal on radio.”

Smith explained, “None of those songs were really written as singles whatsoever. The fact they’re coming through is mindblowing to me.”

The writer and producer is working on Stormzy’s second album alongside Dave’s debut, and said new music “is in a good place”.

“I think record companies have realised that it’s not about throwing money at artists. There is a great understanding now between artists and labels of the creative process as the most important thing,” he said.

Subscribers can read the interview with Smith, Dave and Raye in full here.