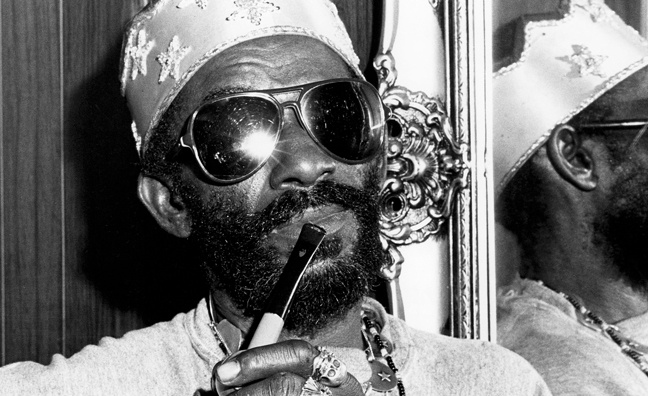 There has been an outpouring of music industry tributes to legendary Jamaican musician Lee ‘Scratch’ Perry, who died over the weekend aged 85.

Perry died on August 29 at Noel Holmes Hospital in Lucea, Jamaica, prompting the country’s Prime Minister Andrew Holness to praise his “sterling contribution” to music. His first foray into the industry came in the 1950s, when he began working with influential producer Clement Coxsone Dodd at Studio One. He went on to work for Joe Gibbs' Amalgamated Records, before forming his own label, Upsetter, and releasing his first single People Funny Boy in 1968.

He quickly became synonymous with a distinctive new production technique that would shape the sound of reggae and beyond for generations to come. He experimented with sampling and remixing, cementing the sound of what would become dub in his home studio Black Ark. He released a string of successful records with his band, The Upsetters, and was credited as producer on a vast array of singles and albums, including releases by Bob Marley, Junior Murvin, Adrian Sherwood, The Clash and The Beastie Boys.

Perry won the Grammy for Best Reggae Album for Jamaican E.T. in 2003 and was nominated four other times. He also received the Order Of Distinction honour in Jamaica in 2012. His most recent release was this year’s single No Bloody Friends with Ral Ston.

Read a selection of tributes to Perry below.

Lee ‘Scratch’ Perry has left us and the world of music has lost one if it’s most enigmatic creators; an amazing, incomparable phenomenon who’s sonic sound waves transformed our lives; the ‘Blackboard Jungle’ album alone stands as a beacon of his genius. pic.twitter.com/WgYZ106UNR

Was such an honour working with the legend over my career in PR. May they RIP ~ A true pioneer and legend of Raggae. #LeeScratchPerry https://t.co/u95AzcZubS

RIP The great Lee ‘Scratch’Perry. So much of every sound that now rules cool came from him, Music owes him a great debt. ‘ The Salvador Dali of music’ . A unique genius.
?@IvorsAcademy? strength & prayers to his loved ones & fans the world over. https://t.co/XXHclOE8CG

RIP masterful Lee 'Scratch' Perry
'don't be pushed by your problems, be lead by your dreams...'https://t.co/eqtIV8AGf3 pic.twitter.com/nACTcwQ4lN

We lost another phenom friend & pioneer, Mr. Lee "Scratch" Perry /28 Mar 1936 – 29 Aug 2021) was a Jamaican record producer and singer noted for his innovative studio techniques and production style. (Send out ur prayer's to his family & friends) R.I.P. Brother.????Bootsy baby!!!???? pic.twitter.com/rr6QIfkTYo

such sad news about the passing of the mighty and absolute visioneer Lee Scratch Perry.. I was so excited to have him on @WfSete in 2020... alongside Sherwood Mala and Jah Shaka... a night of imagined dreams passed.... but the music and source will live forever. RIP

We send the most love and respect we can to Lee Perry who passed today, to his family and loved ones and the many he influenced with his pioneering spirit and work. We are truly grateful to have been inspired by and collaborated with this true legend.
- Mike pic.twitter.com/cmdcnI6hHT

RIP the almighty Lee ‘Scratch’ Perry, musical genius, free spirit and a regular Glastonbury performer. We shall miss him. pic.twitter.com/OrigX7Rqd0

RIP LEE PERRY.
Another musical legend the great producer and Dub pioneer, Lee “Scratch” Perry also known as The Upsetter has died, on the 29th of August, aged 85.
Starting out his career with Coxsone and Studio One and then Joe Gibbs he eventually set up his own “Upsetter” label pic.twitter.com/Lae1sSaIpR